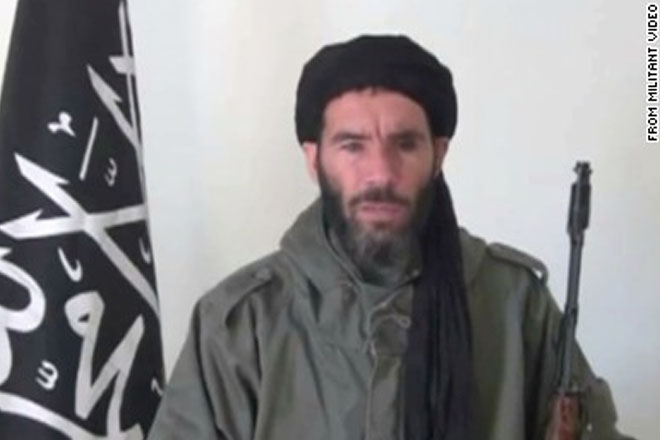 (CNN) — A U.S. plane carried out a strike inside Libya on Sunday, reportedly killing a key terror figure in North Africa, U.S. and Libyan officials said.

The Libyan government said Belmokhtar was killed in the strike, something that U.S. officials have not confirmed.

Federal prosecutors in New York had charged the one-eyed Belmokhtar in 2013 with crimes related to a brazen attack on a gas facility in Algeria were 37 hostages died. Three Americans were among the dead.

“It was a single strike conducted by a manned aircraft,” a Pentagon official with direct knowledge of the operation told CNN. There were no U.S. personnel on the ground, the official said.

U.S. aerial intelligence assets were tracking Belmokhtar’s movements at the time of the raid, the U.S. official said, but the outcome of the operation was still being assessed.

The Libyan government went further in a statement Sunday, saying that the U.S. airstrike “led to the killing of Moktar Belmokhtar and a group of Libyans who are members of a terrorist organization in Eastern Libya.”

In New York, Belmokhtar was charged on various conspiracy counts including hostage-taking, kidnapping, providing material support to al Qaeda and conspiring to use a weapon of mass destruction.

Belmokhtar is the founder of the Signed-in-Blood Battalion, also known as the al-Mulathamun Battalion. The group claimed responsibility for the January 2013 attack in Algeria.

In the Algerian siege, heavily armed militants in pickups struck a sprawling state-owned natural gas complex near In Amenas, gathered the Westerners who worked there into a group and tied them up.

Belmokhtar had said the attack was in retaliation for Algeria allowing France to use its airspace to battle Islamist militants in Mali.

The Algerian military tried to negotiate with the militants during the standoff, but their demands to release militants held prisoner in Algeria were deemed unreasonable, leading to intervention by special forces troops.

The gas facility operated in cooperation with foreign energy firms such as Norway’s Statoil and Britain’s BP — and as such, employed workers from several Western countries.