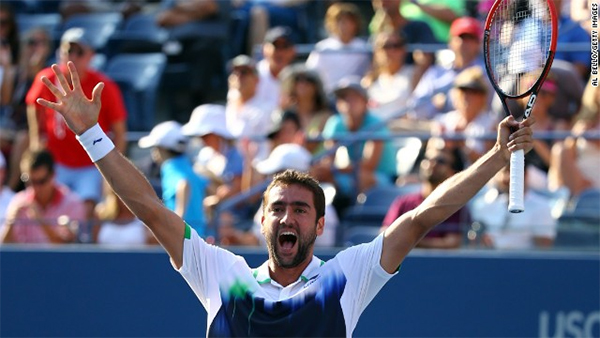 (CNN) — Marin Cilic booked his place in the semifinals of the U.S. Open for the first time in his career with a straight sets win over Tomas Berdych.

Cilic, who last reached the semifinal of a grand slam in 2010 at the Australian Open, won 6-2 6-4 7-6 to set up a last four clash with either Roger Federer or Gael Monfils.

Cilic, seeded 14th, is the first Croat to make the last four at Flushing Meadows since his coach, Goran Ivanisevic, who reached the same stage in 1996.

Berdych, who had held a 5-3 advantage in the head to head between the pair, was hoping to reach the semifinals for the second time in the past three years.

But the World No.7 was unable to cope against Cilic’s big serve with the Croat hitting 19 aces on his way to victory.

Having surrendered the first two sets, the Czech appeared set to take the contest into a fourth set when he began to find some form.

Berdych led 3-0 in the third set but Cilic refused to be beaten, hitting back to take it to a tiebreak which he eventually won 7-4.