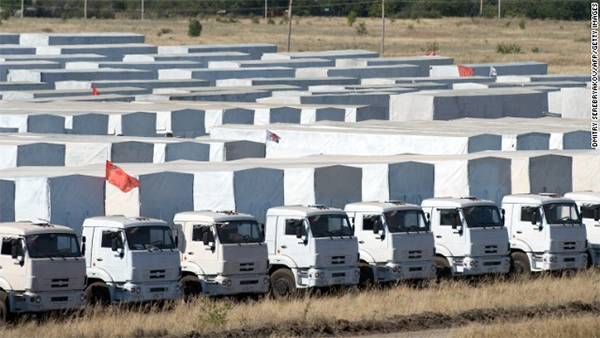 Kiev, Ukraine (CNN) — One month after Malaysia Flight 17 was shot down over Ukraine, government military forces there said they’ve made advances Sunday against pro-Russian separatists.

Ukrainian forces regained control over the strategic town of Yasynuvata in Donetsk in the southeastern part of the country, according to the official Twitter account of President Petro Poroshenko. They’ve also made gains in Luhansk in the eastern part of Ukraine, government forces told CNN. The Ukrainian army has entered Donetsk and raised the Ukrainian flag in front of the district’s police offices, said National Defense and Security Council spokesman Col. Andriy Lysenko.

Yet the site of crash MH17 is still unsafe as fighting near it rages, officials tell CNN.

Most investigators left Kiev this week but small teams from several countries remain in Ukraine on standby. For now, the search is officially suspended.

All 298 people on the Boeing 777 were killed when it crashed near the Russian border in eastern Ukraine. Ukrainian and U.S. officials have alleged that a Russian-made missile system was responsible for shooting the aircraft down. The separatists and Russians deny that.

And while hopes diminish for answers about MH17, thousands of people in the region have no access to water, electricity and proper medical aid, humanitarian agencies have said.

The Donetsk water supply was turned off temporarily after the city’s water treatment facility stopped operating because ongoing fighting downed power lines. The Donetsk City Council announced on its website that the water supply would be cut off starting at 9 p.m. local time on Sunday (2 p.m. ET).

Ukrainian officials acknowledged Sunday that a convoy of more than 260 Russian vehicles on the border is, in fact, carrying humanitarian aid, a statement on the Ukrainian Cabinet website said.

The convoy initially sparked fears that Russia was trying to use a humanitarian convoy as a cover for sending in more aid and weapons for pro-Russian rebels in eastern Ukraine.

But there could be a hold up on the delivery of that aid.

Ukraine received an inventory of the supplies Saturday, which was signed by the head of the regional International Committee of the Red Cross delegation to Russia.

Pascal Cuttat says there are still “basic technical details” that need to be discussed.

The convoy’s inspection will not happen Sunday, said Victoria Zotikova, a spokeswoman for the ICRC.

Zotikova added that the aid agency is missing security guarantees from all sides.

The Ukrainian-recognized governor of Luhansk, Irina Verigina, said that she doesn’t want aid from Russia.

Ukraine says it is distributing its own aid through the Red Cross.

“They send us tanks and Grads (rocket-launching vehicles) overnight and offer to send humanitarian aid by day,” Verigina said.

Ukraine: We destroyed most of a Russian convoy

Ukraine claims its artillery destroyed much of a military convoy that crossed from Russia into Ukraine last week, an incursion that two British newspaper journalists say they witnessed.

If true, Ukraine’s account and the British reports appear to give credence to what Kiev has long alleged — that Russia has been sending troops and arms into eastern Ukraine.

A diplomatic row was brewing Friday over the reports, with the United Kingdom’s foreign office summoning Russia’s ambassador in London to explain the incident.

Russia’s Foreign Ministry has denied any such incursion, and its foreign minister will meet in Berlin with his counterparts from Ukraine, Germany and France on Sunday, state-run news agency RIA-Novosti reported. The meeting’s agenda wasn’t immediately released.

Those concerns took on a new light when British media outlets The Guardian and The Telegraph reported that armored personnel carriers, along with other vehicles with Russian military plates, crossed the border near Donetsk.

The Guardian reported that it witnessed 23 armored personnel carriers, in addition to other vehicles with Russian military plates, cross into Ukraine through a gap in a barbed wire fence. “Armed men were visible in the gloom by the border fence as the column moved into Ukraine,” the Guardian report reads.

This is the first time foreign media recorded such an incursion, though it illustrates what Kiev has said has been happening for months — that Russia has been sending troops and equipment to help the rebels, said Lysenko.

Poroshenko “expressed concern over the situation on the border, particularly over the fact that the inflow of Russian arms and military machines in Ukraine through the open part of the border continued,” his office said.

Lysenko said he didn’t know exactly how many vehicles crossed the border, or how many Ukraine’s artillery managed to destroy.

A Ukrainian fighter jet was shot down on Sunday in the Luhansk region, Leonid Matyuhin, the spokesman for Ukraine’s counter-terrorist operation, told CNN. The pilot managed to eject and is safe, Ukrainian state media reported.

The ongoing fighting — sparked last year with by political crisis over whether Ukraine would seek closer ties with Europe or Russia — has left more than 2,000 people dead and just under 5,000 wounded in eastern Ukraine since mid-April, according to estimates from U.N. officials.

Yanukovych left office after violent protests against his government in the capital, Kiev. Those protests were motivated in part by his decision to back out of a trade deal with the European Union in favor of closer ties with Russia.