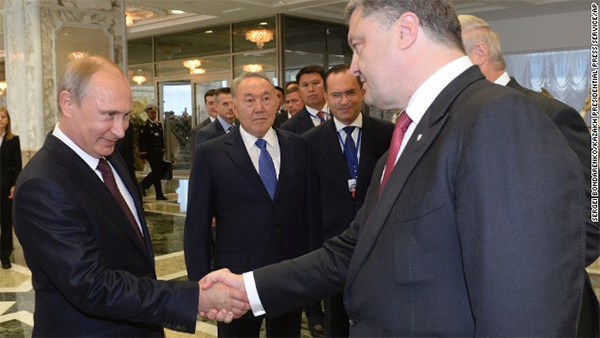 “Our main goal is peace. We demand resolute actions that will bring peace to the Ukrainian land,” he said in a statement on his official website early Wednesday.

It’s not yet clear how the apparent diplomatic progress will translate into a halt in fighting on the ground.

Ukraine’s National Defense and Security Council told reporters at a briefing Wednesday that Russian forces were directing massive artillery fire over the border at the town of Novoazovsk, in the south of the Donetsk region.

Russian forces and pro-Russia rebels have seized villages around the town, the NSDC said.

The NDSC also claimed that a Russian tactical battalion was present in the village of Pobeda, in Ukraine’s Luhansk region.

“If these troops got lost and accidentally found themselves in Ukraine as well, they should go back East,” the update said.

On Tuesday, Ukraine’s Security Service said it had detained 10 Russian soldiers in Ukraine. Russian state media cited a source in the Russian Defense Ministry as saying the soldiers had been patrolling the border and “most likely crossed by accident” at an unmarked point.

Moscow has repeatedly denied allegations by Kiev that it has sent troops over the border.

Poroshenko said Tuesday’s talks in Minsk, Belarus, had focused on the issue of border control “to prevent the movement of armored vehicles, mercenaries and ammunition.”

Ukraine and Russia have agreed to begin consultations between border guards and general staff commanders, he added via Twitter.

The meeting between Putin and Poroshenko, which lasted nearly two hours, was the first since the pair met briefly in June on the sidelines of events to commemorate D-Day.

It came at a summit held by the Moscow-led Customs Union, a trade bloc which also includes Belarus and Kazakhstan. Senior European Union officials were also present in Minsk, with EU foreign policy chief Catherine Ashton at their head.

Putin said the bilateral meeting was “positive” and that he and Poroshenko agreed on the need to “renew our dialogue.”

Putin told reporters that Russia couldn’t be involved in ceasefire talks because those discussions should be between Kiev and separatists in eastern Ukraine. Moscow is willing to assist, he added.

Ukraine and the West have repeatedly accused Moscow of fomenting the unrest by supporting and arming the pro-Russia rebels in eastern Ukraine’s Luhansk and Donetsk regions.

Speaking after the talks, at a joint news conference with Ashton, Poroshenko said a “road map” would be drawn up on the basis of his previously announced peace plan.

Consultations will be made through a contact group to try to reach a ceasefire as soon as possible, he said.

That ceasefire would be monitored by the Organization for Security and Cooperation in Europe, he said, “which will be able to monitor and verify the ceasefire, which has to be two-sided by any means.”

Poroshenko announced a unilateral ceasefire by government forces after taking office in June, but he called an end to it after continued attacks by rebels.

He also said Tuesday that a deal had been made to free those people held by armed groups. “We’ll see very soon the liberation of the hostages who’re being illegally kept now,” he said.

The conflict was first sparked last year by a political crisis over whether Ukraine would seek closer ties with Europe or with Russia. The ouster of pro-Moscow President Viktor Yanukovych in February was followed by Russia’s annexation of Ukraine’s Crimea region in March and a declaration of independence by separatist leaders in the Donetsk and Luhansk regions.

U.N. officials estimate that more than 2,000 people have died and nearly 5,000 have been wounded in eastern Ukraine since mid-April.

Poroshenko in June signed a landmark EU trade pact, despite opposition from Russia.

On Tuesday, after meeting with Ashton, Porshenko said Ukraine would ratify the Association Agreement with the European Union in September and immediately send the ratification documents to Brussels.

His statement Wednesday said that discussions would be held on minimizing the impact of Ukraine’s move on its neighbors.