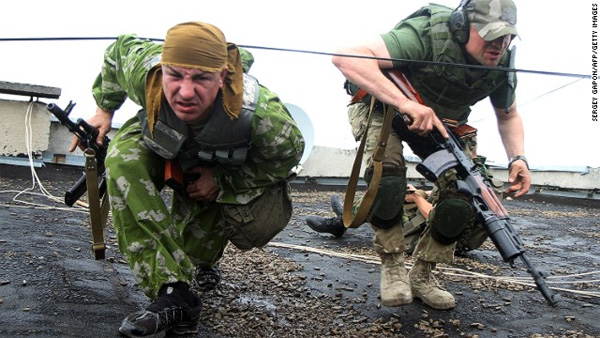 Ukrainian official: Five militants killed in attack on border guard base in Luhansk

Donetsk, Ukraine (CNN) — Five militants were killed in the volatile eastern Ukrainian city of Luhansk on Monday after they took part in a large coordinated assault on a border guard base, an official at the Ukrainian State Border Guard Service told CNN.

Also Monday, the White House announced Vice President Joe Biden would lead a U.S. delegation to Ukraine to attend the inauguration of Petro Poroshenko as president on Saturday.

The attacks in Luhansk began early Monday when least 100 militants tried to storm the border unit on the southern edge of the city, said Oleg Slobodyan, the spokesman for the Ukrainian State Border Guard Service.

The guards repulsed the first few attacks, but then the militants changed positions and began to shoot from inside nearby buildings where local people live, Slobodyan said, adding that the attackers weren’t letting residents out of their homes.

He said border guards were refraining from returning fire because they didn’t want to cause civilian casualties.

As of 9 a.m. local time (2 a.m. ET), an estimated 500 militants were still attacking the base, Slobodyan said.

Fighters observed a roughly 20-minute truce in the afternoon for the removal of injured militants and border guards, the border service’s website said.

It was not immediately possible to independently confirm the casualty numbers.

Video from the scene shows at least one rocket landing on the edge of the compound.

The separatist unrest that has gripped Ukraine in recent weeks has been centered in the eastern regions of Donetsk and Luhansk.

Ukraine’s military sent air support for the border guards Monday, but residents’ proximity to the guards’ base “limits the full-scale use of the military aviation,” said Vladislav Selezhnev, a spokesman for the Ukrainian government’s Anti-Terrorist Operation. Still, the military was able to take out two mortar sites from the air, he said.

Meanwhile, seven people were killed Monday by an explosion at the regional government building in Luhansk, health officials said.