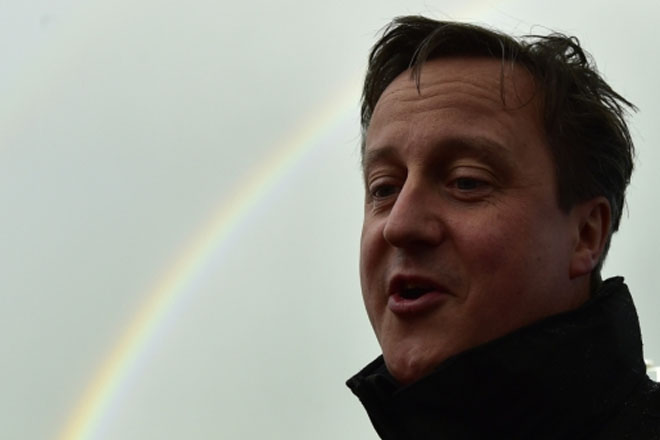 London, United Kingdom (AFP) — Against all predictions, David Cameron on Friday won the first Conservative majority since 1992, securing himself another term as Britain’s prime minister and silencing his critics — at least for now.

The 48-year-old’s failure to win a majority in the House of Commons at the last election, after 13 years of a Labour government, had dogged him for the past five years as he led a coalition with the smaller Liberal Democrats.

But a photo posted on his Twitter feed as the results rolled in, showing him with his arms around his beaming wife Samantha, said it all. “Here’s to a brighter future for everyone,” the message said.

Opinion polls before Thursday’s vote had pointed to a result in which neither the Conservatives nor Labour would win a majority of Commons seats.

Faced with the prospect of another coalition, or even defeat if Labour managed to team up with the Scottish nationalists, talk had already begun about who would succeed Cameron.

But it is now Labour leader Ed Miliband who is standing down, and Cameron bounced enthusiastically into Conservative party headquarters on Friday morning declaring the vote “the sweetest victory of them all”.

Cameron will not have a large majority, however, meaning he will have to keep his party in line to push through his legislative programme, including a second round of unpopular spending cuts.

He must also fulfil his promise to renegotiate Britain’s membership of the European Union ahead of a promised in-or-out referendum by 2017, and may yet fall foul of his rebellious eurosceptic backbenchers.

To top it off, Cameron has promised to step down as leader before the next election in 2020, raising the prospect of an internal party race to succeed him well before then.

The tennis-playing, karaoke-loving Tory leader had faced accusations during the campaign and throughout his premiership of being too laid back, although supporters insist it is simply his style of management.

Certainly Cameron showed his passion in the final fortnight before the vote, literally rolling up his sleeves and proclaiming his determination to win as he relentlessly criss-crossed the country.

He and his party campaigned on one main issue, the economy, pointing out Britain’s return to growth and low unemployment after a deep recession, and urging voters to let them finish their “long-term economic plan” for recovery.

But Cameron’s privileged background has sparked persistent attacks that he is out of touch with the lives of ordinary voters, particularly those hit by his austerity programme.

The son of a stockbroker, Cameron was educated at the elite Eton College and Oxford University.

On graduating, he worked for the Conservatives as an advisor before a stint in public relations which ended when he was elected to parliament in 2001.

Rising swiftly, he was elected Conservative leader in 2005, aged 39, pledging a more “compassionate Conservatism” that would reach out beyond the party’s base.

Cameron prioritised the “detoxification” of what one of his leading ministers called “the nasty party” by avoiding traditional right-wing issues such as immigration and stressing a more liberal agenda.

He posed with husky dogs at the North Pole to highlight his green credentials, while his respect for public services was underlined by the care his disabled son Ivan received from the state-run National Health Service (NHS).

Ivan, who had cerebral palsy and severe epilepsy, died aged six in 2009. Cameron and his wife Samantha have three surviving children.

In 2010, Cameron became Britain’s youngest prime minister for 200 years but his options were limited by the fall-out of the global financial crisis and the constraints of coalition government.

His first term was defined by spending cuts, wrangling over Britain’s role in the EU and a smaller role on the world stage prompted by long military campaigns in Iraq and Afghanistan and cuts to the defence budget.

Austerity and the EU are again likely to dominate the new government’s programme, although Cameron may be hoping for a more positive legacy from his second term.