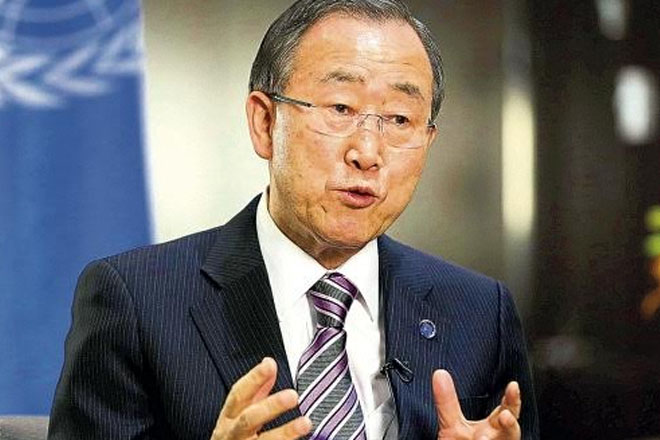 Addis Ababa, Ethiopia (AFP) — UN Secretary-General Ban Ki-moon said Tuesday the world was headed for a “generation free of AIDS”, after UNAIDS reported a 35-percent drop in new HIV infections from 15 years ago.

The positive news was also coupled with calls for more funding, with the objective of eliminating the virus by 2030. The United Nations also warned that continuing stigmatisation of sex workers, drug users and homosexuals were barriers to progress.

“The world has delivered. We have achieved and exceeded the goals regarding AIDS. We have 15 million people on HIV treatment,” Ban said in the Ethiopian capital Addis Ababa, where he is attending a global development summit.

According to the UNAIDS report released on Tuesday in Geneva, there have been remarkable strides since the advent in 1996 of anti-retroviral drugs, which suppress the human immunodeficiency virus (HIV).

Though not a cure, the therapy creates a virtuous circle. The less the virus is in circulation, the less likely it is that people become infected.

Although new HIV infections declined to two million in 2014 against 3.1 million 14 years ago and the number of new infections has noticeably decreased or remained stagnant, UNAIDS warned spending had plateaued.

There are currently 36.9 million people living with HIV around the world. Around March this year, 15 million of them were accessing anti-retroviral therapy.

“In 2011 world leaders called for reaching 15 million people with life-saving HIV treatment by 2015. And that is exactly what the world did — ahead of schedule,” said UNAIDS chief Michel Sidibe in a report entitled “How AIDS changed everything.”

But the report said more needed to be done.

“After a decade of unprecedented growth, financing for the AIDS response has levelled off. At the same time, the world now has compelling evidence that people with HIV benefit by accessing anti-retroviral therapy as early as possible,” it said.

UNAIDS said further increases and efficient reallocation were needed to address the “increased need of earlier initiation of anti-retroviral therapy” and called for AIDS spending of $32 billion (29 billion euros) annually between now and 2020 in the hope of eliminating the virus by 2030.

“Stigma, discrimination and punitive laws continue to affect the people most impacted by HIV and to block their access to HIV services in every region of the world,” the report said.

“The criminalisation of sex work, drug use and same-sex sexual relationships among consenting adults hinders attempts to reach people at higher risk of HIV infection.”

Sidibe said he was hopeful that the next decade would “give us a more effective vaccine”.

The third target is that 90 percent of all people receiving anti-retroviral therapy will have viral suppression.

2015 is the deadline year for the Millennium Development Goals which in September 2000 rallied the world around a common 15-year agenda to tackle poverty and hunger, prevent deadly but treatable diseases and expand educational opportunities to all children.

In September, world leaders will gather at the United Nations in New York to adopt a new agenda for sustainable development in which health is one of the top priorities.

Asia is a distant second with five million cases but there has been a recrudescence of new infections. Last year there were 340,000 new HIV infections and China, Indonesia and India accounted for 78 percent of them.

Medical charity Medecins sans Frontieres (MSF) hailed the strides made in the fight against AIDS but stressed that the world “cannot afford to lose any momentum”.