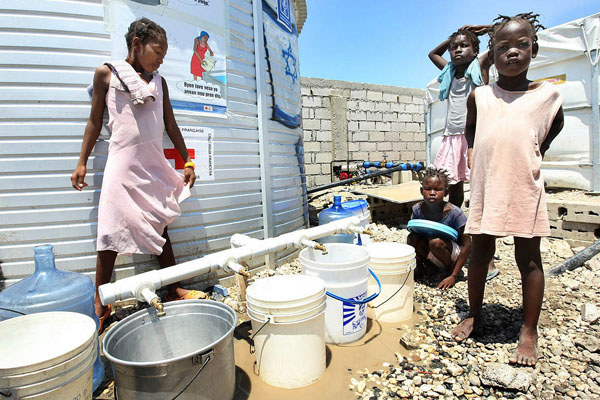 Washington, USA — United Nations Secretary-General Ban Ki-moon joined global partners, including the head of the World Bank, at a high-level conference in Washington, DC, to combat water borne diseases like cholera in Haiti and, raise commitments to provide clean water, improved sanitation and health services in cholera endemic areas over the next three years.

“We have made significant progress in controlling the cholera epidemic in Haiti, but too many people are still getting sick, mainly because they don’t have access to clean water and lack sanitation systems. Cholera remains endemic and water borne diseases are one of the leading causes of infant mortality in Haiti,” said Kim.

“Expanding coverage of safe water and sanitation is possible. We cannot ignore this opportunity to prevent thousands more Haitian children from dying from waterborne diseases,” he added.

The high-level conference is being chaired by Kim and Ban, who invited leading partners to join in an effort to substantially improve water and sanitation coverage in Haiti, and strengthen health services.

“For decades, water and sanitation have been neglected in Haiti, with serious consequences for public health, said Ban, explaining that without safe water and adequate sanitation, people die from preventable waterborne illnesses, including diarrhea. Malnutrition rates worsen, stunting not only a child’s development but that of the country itself. Children, especially girls, stay out of school.

“We now need to catch up. We must help the Haitian people. We must bring access to water, sanitation and healthcare within reach of every Haitian,” the secretary-general declared, emphasizing that the Haitian government is “fully mobilized” and all UN agencies in the country will continue to support the government’s efforts.

The UN chief went on to say that Dr Paul Farmer, his special adviser for community-based medicine and lessons from Haiti, and Pedro Medrano, the UN senior coordinator for resource mobilization for Haiti cholera elimination, have been tracking pledges and disbursements towards the country’s national action plan.

“As of today, the $2.2 billion, 10-year national plan is just 10 percent funded. While a lot has been done, there is clearly much more to do,” said the secretary-general.

“I call on all of Haiti’s partners to step up, sustain the recent momentum, and help build a healthy Haiti underpinned by clean water and improved sanitation,” said Ban, adding that the Haitian people expect their government and the international community to deliver.

“If we all do our part, we can help Haitians to realize a healthier, more prosperous future,” he said.

As for the “Total Sanitation” initiative he launched with Haitian Prime Minister Laurent Lamothe when he visited Haiti in July 2014, Ban said: “I had an emotional visit to Haiti in July, when I heard first-hand how cholera has affected families. I also saw what communities can do… and how resilient people were. With a little bit of help, we can help address the underlying risks and make them free of disease.”

That campaign targets an initial 20 communes, covering three million people in the next five years, according to the latest UN fact sheet on Haiti.

The campaign will strive for zero open defecation, increased access to water and sanitation infrastructure in primary and secondary schools, as well as in health centres. And it will also encourage greater household investments in durable, hygienic latrines.

New costing analysis conducted by the World Bank and Haiti’s Department of Health and National Department for Water and Sanitation (DINEPA) estimates that $310 million investment in water, sanitation and health is needed to save lives and prevent cholera in high prevalence zones over the next three years.

The new $50 million World Bank pledge will contribute to the implementation of a project that will reach about two million people in cholera hot spots of rural Haiti.

According to the World Bank, about 38 percent of Haitians lack access to safe drinking water, and only 24 percent of Haitian families has access to improved sanitation. Evidence shows that for every dollar invested in water and sanitation, seven dollars are gained in healthcare savings and productivity in Latin America and the Caribbean. This new initiative calls for concerted push for water and sanitation will help save lives and improve people’s health.

The conference is taking place as significant progress has been made in the fight against cholera, but at the same time, more than 30 people get infected every day and water borne diseases remain one of the leading causes of child mortality.

The United Nations has developed a two-year support plan to the Haitian national plan to eliminate cholera and which focuses on four pillars: epidemiological surveillance; health promotion; medical treatment; and water, hygiene and sanitation.