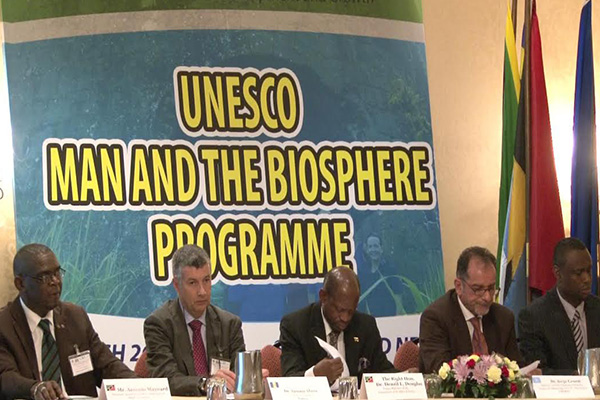 Basseterre, St. Kitts, (SKNIS) — Residents of Keys, Cayon, Hermitage, Canada and Ottley’s have been invited to a Town Hall Meeting for critical updates about the UNESCO Man and the Biosphere (MAB) Programme and to discuss the potential development of the area.

The Town Hall Meeting, which is being hosted by the UNESCO MAB Committee, will be held Wednesday, February 26, 2014, at 7:00 p.m. at the Cayon Community Centre and will allow open discussion about the area which has been termed the St. Mary’s Biosphere Reserve.  The area was officially designated as part of the UNESCO World-Wide Network in November 2011, at the 36th Session of the UNESCO General Conference.

Members of the MAB Committee met earlier this month and determined the necessity of ensuring that residents knew precisely what is a Biosphere Reserve as well as the untapped potential for the development of the area.  It was decided that one way to achieve this was via a Town Hall Meeting.

The MAB Committee meeting was chaired by Secretary General of the UNESCO National Commission, as well as Chairperson of the MAB Committee, Antonio Maynard who encouraged all present, by noting that the initiative was medium to long term and it is anticipated that much of the more visible activities would take place during 2014 and 2015.  It was also noted that the smaller and more concise MAB Bureau had continued to meet regularly.

Critical matters discussed at the general committee meeting included that approval from the authorities still had not been granted for the establishment of an Interpretation Centre for the St. Mary’s Biosphere Reserve on the Keys Beach.  Dr. Kimberly Stewart, Site Coordinator of St. Mary’s Biosphere Reserve and Chairperson of the St. Kitts Sea Turtle Monitoring Network, noted that although quite a few attempts had been made to meet with the relevant authorities, no marked progress had been made since last year.  It was also revealed that a “Marketing and Citizen Awareness Project” proposal for the area had been submitted to the committee and to the Global Environment Fund (GEF) – a global alternative asset manager that invests in energy, environmental, and natural resources sectors.  It was noted that it was critical to involve residents of the area in any activity considering that this was one of the key components of the functioning of biosphere reserves.

Cosbert Manchester, Director of the St. Christopher National Trust reported that his organization had commenced work on the restoration of Spooner’s Estate Yard which had been cleaned and was being surveyed to establish the boundaries.

It was also noted that facing stones used for the enhancement of buildings were constantly being removed from heritage sites around the island for placement on new buildings.  This practice was frowned upon by the committee since the heritage sites should be protected by the authorities and it was suggested that residents of these areas should serve as watchmen and reporters of such illegal activities.