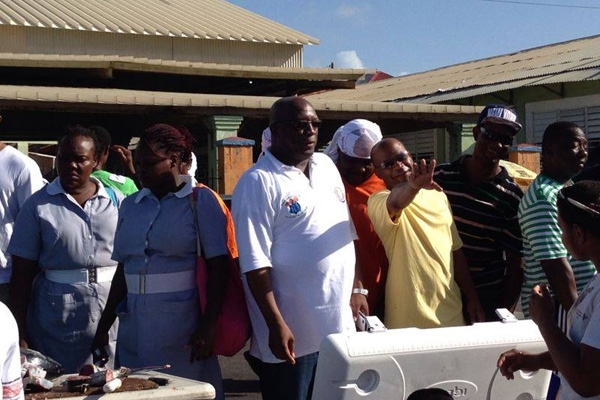 Saturday is the busiest market day and vendors are usually fully engaged in marketing their agricultural produce; some as early at 4:00 am each Saturday.

The stalls inside and outside the market were all visited within a two hour period and the Unity Team was embraced fully as the vendors were assured of positive support from the team forging ahead to form the government.

Dr. Harris has been recently the Minister of Agriculture before taking a stand against the Dictator and now illegitimate Prime Minister Dr. Denzil Douglas and throughout the visit demonstrated his understanding of the issues facing farmers and vendors. His discussions of the issues were fully buttressed by the vision of the members of the team that will contest the election under the banner of the Peoples Action Movement as well as others from the Peoples Labour Party.

The day was an eventful one that has been described by the vendors as a welcoming sign of things to come.

After leaving the market Team Unity traveled to the J.N.F Hospital where they visited the sick and engaged in prayers and worship. The visit was a spirit filled encounter that was welcomed by the sick persons at the hospital.

During that visit Team Unity comforted the family of eighteen year old J’Anthon Silliday who had succumbed that morning at the JNF Hospital.