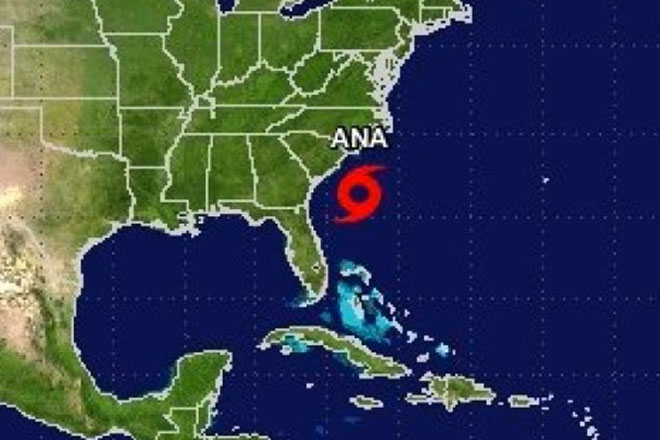 North Carolina, United States (AP) — Tropical Storm Ana lost the last of its strength and was downgraded to a depression as it created wet and windy conditions along the North and South Carolina coasts.

At 5:00 pm Sunday, the National Hurricane Center said the centre of the depression was located about 15 miles north-east of Whiteville. The storm’s maximum sustained winds were at 35 mph. Gradual weakening was expected over the next few days, according to the hurricane centre.

The hurricane centre said its latest advisory would be the last on Ana and its remnants.

The storm had been stationary over the north-eastern coast of South Carolina. Forecasters said Ana was moving north-northeast at 8 mph and would pick up speed. It was expected that the storm would move over eastern North Carolina on Sunday night and into south-eastern Virginia on Monday.

The forecast also called for between two and six inches of rain over the affected regions, and coastal flooding, especially around high tide. A combination of storm surge and the rising tide created the possibility of up to two feet of water above normal from Cape Hatteras as far south as South Carolina. Forecasters said those conditions should diminish as well over the next day or so.

Forecasters also reiterated their warnings for rip currents along the southeastern US coast.

While the storm may have ruined some Mother’s Day plans, the University of North Carolina at Chapel Hill held its commencement at Kenan Stadium as scheduled. A school spokeswoman says a crowd of about 30,000 sat through occasional drizzle to watch the ceremony.

Photos posted to social media sites showed ocean water washing over some roads at the beach, but officials said there were no major problems to report.

“Nothing really significant. No place in our county where water is going into structures or anything like that,” said Brian Watts, Brunswick County Emergency Services Director.

In Southport, Shirley Haithcox said a few limbs were down and that the Cape Fear River was choppy due to the winds.

“I guess you could say it’s more of a nuisance because it’s just so wet. So far, it hasn’t damaged anything,” Haithcox said. “It’s like a tropical storm. You see the wind blowing the rain down the road. I guess it could be a lot worse. I guess it put a damper on a lot of people’s Mother’s Day.