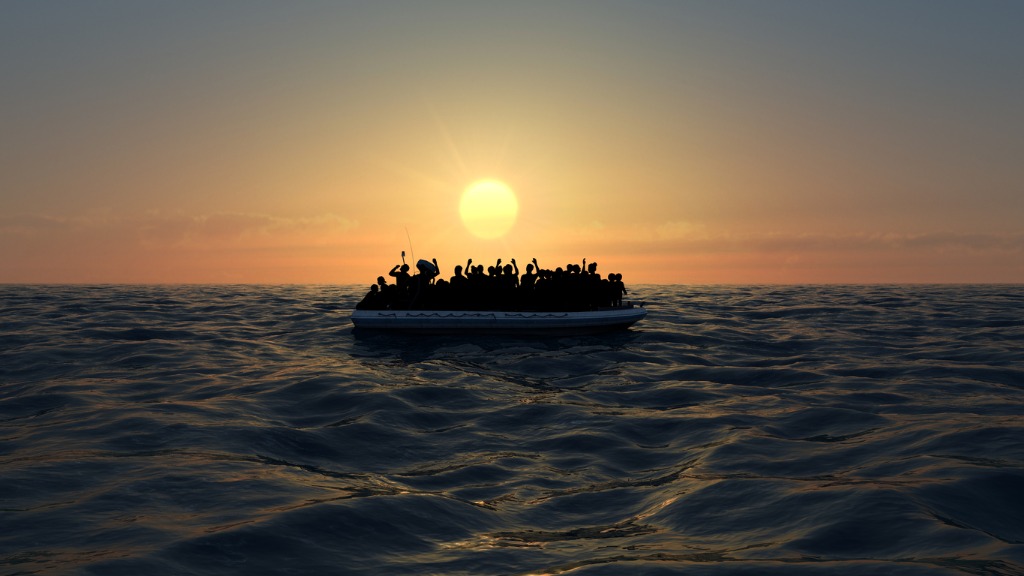 In a Memorandum for the Secretary of State on Presidential Determination on Refugee Admissions for the Fiscal Year 2022, Biden said he was affirming “the United States’ deeply-held commitment to welcoming refugees,” raising the overall refugee admissions target to 125,000 for the forthcoming fiscal year.

“The admission of up to 125,000 refugees to the United States during Fiscal Year 2022 is justified by humanitarian concerns or is otherwise in the national interest,” said Biden in the White House Memorandum.

Besides Latin America and the Caribbean, the US president said the admissions numbers shall be allocated among refugees of “special humanitarian concern” to the United States in accordance with the following regional allocations: Africa, 40,000; East Asia, 15,000; Europe and Central Asia, 10,000; Near East/South Asia, 35,000; and Unallocated Reserve, 10,000.

Biden said the 10,000 unallocated refugee numbers shall be allocated to regional ceilings, as needed.

“Upon providing notification to the Judiciary Committees of the Congress, you are hereby authorized to use unallocated admissions in regions where the need for additional admissions arises,” Biden told US Secretary of State Antony J. Blinken in the memorandum.

“Additionally, upon notification to the Judiciary Committees of the Congress, you are further authorized to transfer unused admissions allocated to a particular region to one or more other regions, if there is a need for greater admissions for the region or regions to which the admissions are being transferred,” he added.

Biden said he has determined that assistance to, or on behalf of, persons applying for admission to the United States, as part of the overseas refugee admissions program, “will contribute to the foreign policy interests of the United States”, urging Blinken to, therefore, “designate such persons for this purpose.”

The US president also said that, if otherwise qualified, persons from Cuba, Eurasia and the Baltics, Iraq, El Salvador, Guatemala and Honduras may be considered refugees “for the purpose of admission to the United States within their countries of nationality or habitual residence.”

In response, Blinken said in a statement that the US “is, and will continue to be, a global leader in international humanitarian response, including in refugee resettlement.

“Not only are we the largest single humanitarian donor, but we also seek to promote stability in regions experiencing a crisis, advance protection and durable solutions for refugees, and facilitate international collaboration to address global refugee and humanitarian crises,” he said, disclosing that, in Fiscal Year 2020, the US provided more than US$10.5 billion in humanitarian assistance, including assistance for refugees.

In consultations with members of the US Congress, Blinken said he underscored that the State Department is “committed to rebuilding our US Refugee Admissions Program in line with our long tradition of offering hope and safe haven to that fleeing persecution.”

“We recognize the tremendous social, economic and cultural contributions refugees make to communities across the United States, and we are committed to rebuilding a robust US Refugee Admissions Program while ensuring its integrity and protecting our national security interests,” the US Secretary of State said.

“A robust refugee admissions program is a cornerstone of the president’s commitment to rebuilding a safe, orderly, and humane migration system,” he added.

US Secretary of Homeland Security Alejandro N. Mayorkas said the new Guidelines for the Enforcement of Civil Immigration Law aims to “better focus the department’s resources on the apprehension and removal of noncitizens who are a threat to our national security, public safety, and border security and advance the interests of justice by ensuring a case-by-case assessment of whether an individual poses a threat.”

“For the first time, our guidelines will, in the pursuit of public safety, require an assessment of the individual and take into account the totality of the facts and circumstances,” Mayorkas said.

He said enforcement priorities for apprehension and removal remain focused on noncitizens who are a threat to US national security, public safety and border security.

But he said the guidelines are a break from a “categorical approach to enforcement.

“They require an assessment of the individual and the totality of the facts, and circumstances to ensure resources are focused most effectively on those who pose a threat,” said the US Homeland Security Secretary.

“There is also recognition that the majority of the more than 11 million undocumented or otherwise removable noncitizens in the United States have been contributing members of our communities across the country for years,” he added. “The fact an individual is a removable noncitizen will not alone be the basis of an enforcement action against them. The department’s personnel are to use their discretion and focus the department’s enforcement resources in a more targeted way.”

“I appreciated the opportunity to speak directly with Ambassador Edmond about our shared commitment to ensuring that Haitian migrants are treated with dignity and respect,” Mayorkas said.  “I look forward to continuing to work with the government of Haiti and other partners throughout the hemisphere as we work toward safe, orderly and humane management of migration in the region.”

Mayorkas thanked the Government of Haiti for supporting the safe return and reintegration of Haitian nationals.

He said he and Edmond agreed that “much work remains to be done to address the drivers of migration,” and that both acknowledged that “the displacement of people is a global crisis and needs worldwide attention.”

Mayorkas said he assured the Haitian ambassador that “the dignified and humane treatment of all individuals, regardless of their immigration status, is his top priority.”

The Secretary also said he shared that the investigation into mistreatment of Haitian migrants in Del Rio, Texas, is ongoing.

Last week, a Haitian legislator in Brooklyn, New York dispatched a letter to Biden, appealing to him to stop the deportation of Haitian migrants and to end what he described as “the cruel treatment of Haitians.”

“I remain deeply troubled by the treatment of Haitian immigrants arriving at the Texas border as they travel north through South America and are subsequently being deported back to Haiti,” said New York City Council Member Dr Mathieu Eugene, the first Haitian to be elected to the City Council, in his letter to Biden.

“Since 2010, Haiti has been subjected to several natural disasters, including tropical storms, two catastrophic earthquakes that caused significant devastation, and continued political unrest and socioeconomic instability,” added Dr Eugene, chair of the Council Committee on Civil and Human Rights, who represents the predominantly 40th Council District in Brooklyn.

“As I have stated on many occasions, Haiti is not prepared to handle an influx of deportees,” continued Eugene in his letter, a copy of which was made available to the Caribbean Media Corporation (CMC). “The country is hurting, and the Haitian people are struggling every day to cope with a substantial amount of personal loss, including emotional and physical trauma, and financial uncertainty.

“Sending Haitian immigrants back to Haiti will only worsen the ongoing situation and will also increase the burden on their family members living in the United States, many of whom have established careers here,” he said. “They are doctors, nurses, cab drivers, medical professionals, business owners, teachers and entrepreneurs. Their work has supported our national economy for generations, and they have served a critical role during the COVID-19 pandemic when the labour of our essential workers helped get our city, our state and our country through the darkest days of this public health crisis.”

The legislator said the Haitian refugees, who are travelling through Mexico into Texas, are “enduring extremely unsafe living conditions and are putting their lives at risk.

“They are human beings, and they have embarked on a very dangerous and treacherous journey to reach what they hope is a safe and stable environment,” he said. “I am urging you to stop their deportation, to help them, and to give Haitian immigrants the due process that they are entitled to.”

Earlier this month, New York Attorney General Letitia James joined a coalition of 17 attorneys general across the United States in dispatching a letter to Biden and Mayorkas expressing deep concern over the treatment of thousands of Haitian refugees currently seeking humanitarian aid along the border in Texas.

The coalition also urged the administration to reevaluate its rush to unfairly expel refugees to Haiti.

Clarke, the daughter of Jamaican immigrants, and Pressley are co-chairs of the US House of Representatives’ Haiti Caucus.

“The Haitian state is still reeling from a series of compounding and emergent crises,” said Clarke and Pressley in a joint statement. “It is unconscionable the administration would choose to deport refugees to Haiti in its current capacity, and it must immediately reverse course and halt these cruel deportations indefinitely.

“In addition, it is disappointing Ambassador Foote’s celebrated experience within the Haitian civil society was not appreciated, and his wealth of knowledge will not continue to be available to Haiti,” added the co-chairs. “It is our hope the administration will consult members of the Haitian civil society, and members of Congress before appointing Ambassador Foote’s successor.”