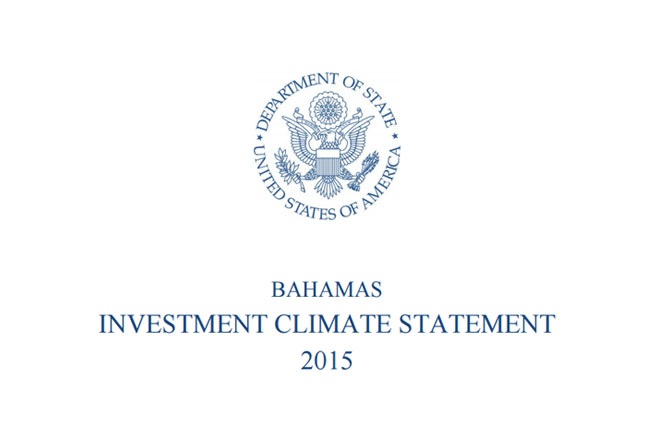 Nassau, Bahamas — For the second year in a row, the US Embassy in Nassau said it continues to receive reports from US companies alleging that there is a lack of “transparency and undue political influence with government bidding and procurement processes”.

According to the US Department of State’s Investment Climate Report 2015 on The Bahamas, American companies “complain that the approval processes are confusing and opaque, with little to no possibility for review or appeal of a decision”.

“The process lacks transparency, there is no requirement to engage in open public tenders and award decisions are not subject to review,” says the report, which is compiled by the US Embassy in Nassau.

“Successive governments sometimes review high-profile contracts executed by previous administrations, although government officials assert that the majority of contracts are not reviewed or altered in any way.”

The report notes that the government has publicly committed to modernizing and reforming the procurement process.

“The Bahamas does not currently have legislation or institutions for the development and implementation of national standards, although the government has indicated its commitment to developing a national standards bureau,” the report says.

It also notes that “allegations of widespread patronage and the routine directing of contracts to party supporters and benefactors have plagued the political system for decades”.

Similar concerns were raised in the State Department’s 2014 report.

At the time, the report said the US Embassy in Nassau had, for the last year, received complaints about the bidding and procurement process.

The Free National Movement (FMM) said the 2014 report was an indictment on the Christie administration.

Davis said that, as far as he was aware, no such interference takes place in the procurement and bidding process.

He said it is “quite transparent”.

Davis said it was “unfortunate” that the report would contain “untested” allegations.

That report also noted that the government failed to fulfill many of its “ambitious campaign promises of economic and fiscal reform”, including implementing a mortgage relief plan and creating 10,000 new jobs.

The 2015 report contains no commentary on government promises.