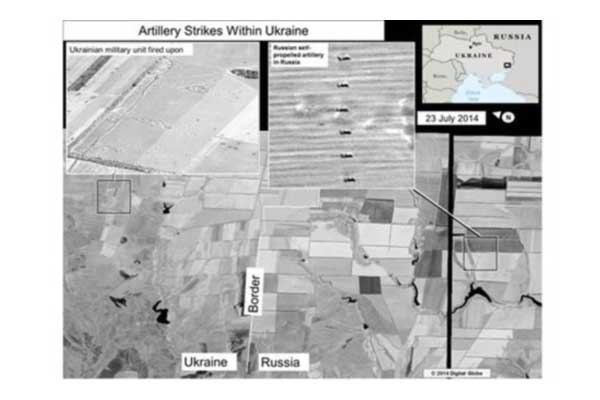 US: Russia has fired rockets into Ukraine

Washington (AP) — Stepping up pressure on Moscow, the US has released satellite images it says show that rockets have been fired from Russia into neighbouring eastern Ukraine and that heavy artillery for separatists has crossed the border.

The images, which came from the US Director of National Intelligence and could not be independently verified by The Associated Press, show blast marks where rockets were launched and craters where they landed. Officials said Sunday the images show heavy weapons fired between July 21 and July 26 — after the July 17 downing of Malaysia Airlines Flight 17.

The four-page memo is part of the Obama administration’s push to hold Russia accountable for its activities in neighbouring Ukraine, and the release could help to persuade the United States’ European allies to apply harsher sanctions on Russia.

The timing of the memo also could be aimed at dissuading Russia from further military posturing. The Pentagon said just days ago that the movement of Russian heavy-caliber artillery systems across its border into Ukraine was “imminent.”

Moscow has angrily denied allegations of Russia’s involvement in eastern Ukraine. Russia’s foreign ministry over the weekend accused the US of conducting “an unrelenting campaign of slander against Russia, ever more relying on open lies.”

Secretary of State John Kerry spoke by phone Sunday with Russian Foreign Minister Sergei Lavrov, urging him to stop the flow of heavy weapons and rocket and artillery fire from Russia into Ukraine, said a State Department official. Kerry did not accept Lavrov’s denial that heavy weapons from Russia were contributing to the conflict, said the official, who spoke on condition of anonymity to provide details of the call.

There was no immediate comment from Moscow. The White House had no separate comment on the release, referring queries to the State Department.