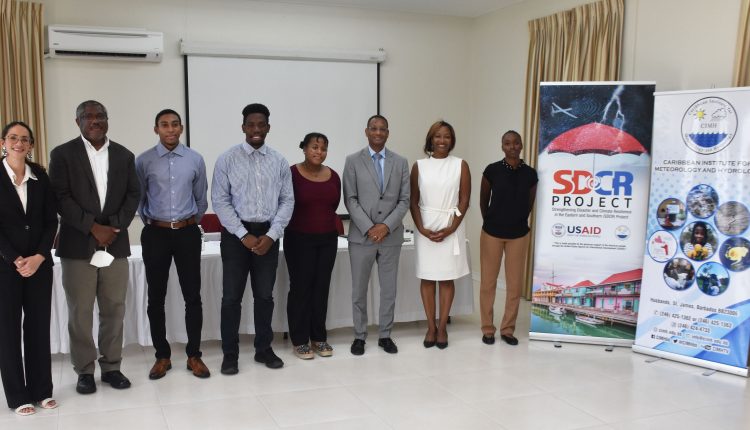 This extension means additional funding to the SDCR activity for a total of just over US$2 million, and further supports the Caribbean Youth Livelihood Internship Program (CYLIP). Specifically, USAID will increase the number of interns; implement a mentorship and expert speaker series for the interns; facilitate the exchange of interns with Alcorn State University, a Historically Black University in Mississippi with which USAID has a Memorandum of Understanding supporting partnerships; and introduce a practical research project which is geared towards solving at least two real-life hydrometeorological or climate problems faced by two youth-owned small businesses in the Eastern Caribbean.

USAID/ESC Regional Representative, Clinton D. White made the announcement of this extension while at CIMH where he accompanied USAID’s Chief Diversity Officer (CDO), Ms. Neneh Diallo who is on official travel to the ESC.

“I also note the incorporation of Alcorn State University, a Historically Black University, into the internship program.  This singular act will redound to the benefit of young lives drawn from the U.S. who will join with young persons from the Caribbean to learn new skills. The sharing of experiences in both directions of these youth, drawn from different cultures, will enhance understanding of themselves, and strengthen their abilities to succeed in a diverse environment following graduation.”

Commenting on the extension of the SDCR, the Principal of the CIMH, Dr. David Farrell said, “We thank USAID for its continued support to the CIMH as demonstrated in the extension and for the increased opportunities provided to youth. It is our intention to broaden the learning opportunities of interns through an expansion of the program supported by partnerships created further afield with the University of Guyana and the Guyana Hydrometeorological Service.”

At the end of the tour, Ms. Diallo met with several of the CYLIP interns and CIMH officials and spoke about her role as CDO at USAID, and the importance of diversity, equity, inclusion, and accessibility for the Agency.