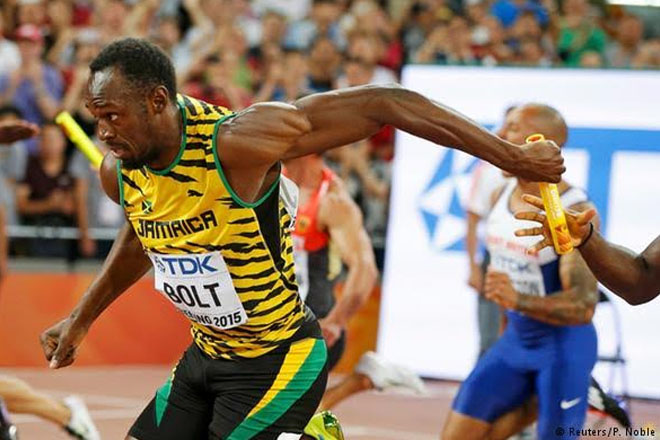 The U.S. earned two medals Saturday, gold from Eaton and silver behind Jamaica in the women’s 4x100m relay. The U.S. leads the medal standings with 16 totals and trails Jamaica and Kenya in golds (six to five) with one day of competition left at the Bird’s Nest.

U.S. track and field has won at least 22 medals at each of the last eight Olympics or World Championships, but it’s unlikely to reach that mark Sunday, even with likely medals in both 4x400m relays.

Bolt, who won the 100m on Sunday and 200m on Thursday, both over American Justin Gatlin, received the baton for the final leg of the 4x100m relay and cruised to win while the U.S. fumbled its last exchange, as it did at the 2013 World Championships.

“We were talking about it,” Bolt said of the American disqualification on Eurosport, “and it’s called pressure.”

Tyson Gay‘s handoff to American anchor Mike Rodgers came too late and out of the zone. The Americans were disqualified several minutes after the race. Gay had pulled even with Rodgers in his lane before Rodgers finally got out with the baton.

“I don’t think the pressure got to me,” Rodgers told media in Beijing. “I was very cool, calm and collected.”

By contrast, Nickel Ashmeade‘s handoff to Bolt was clean, and Bolt ended up winning it for Jamaica by .41 over the U.S., before the disqualification became official. China moved up to silver and Canada bronze.

“I saw the mess after 300 meters and was happy we were not in it,” Bolt said, according to The Associated Press.

The U.S. led Jamaica early in the relay, after Gatlin’s second leg, and would have been about even with Bolt had the Gay-Rodgers exchange gone smoothly.

Gatlin did not anchor the U.S. because he is more used to running the second leg, as he did at the IAAF World Relays in the Bahamas on May 2, when the U.S. defeated a Jamaican team with Bolt anchoring.