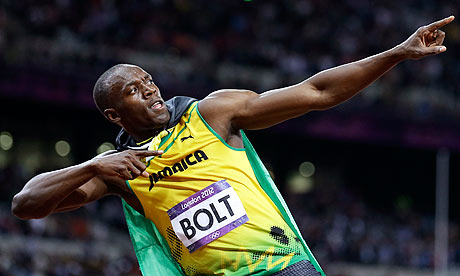 New York (GrenadaSports) – The fastest man on the planet, Usain Bolt of Jamaica, wants to keep running and run the 200 metres in under 19 seconds and possibly as early as 2014.

Bolt, writing in his autobiography “Faster Than Lightning” and which went on bookshelves on Tuesday, said that achieving that landmark would mean having a ‘perfect’ season, similar to his exploits in 2008

So far, (it) is after the Olympics in Rio,” Bolt said of his retirement plans. “I think if I am in great shape, I’ll go there and do what I have to do. I think it will be a good time to retire, on top.”

Winning another three golds in Moscow last month made him the most decorated athlete in world championship history with eight gold and two silvers. He has six gold medals from the Olympics.

“If I want to be among the greats of (Muhammad) Ali and Pele and all these guys I have to continue dominating until I retire,” Bolt said ahead of his final race this season in the 100 at Friday’s Van Damme Memorial.