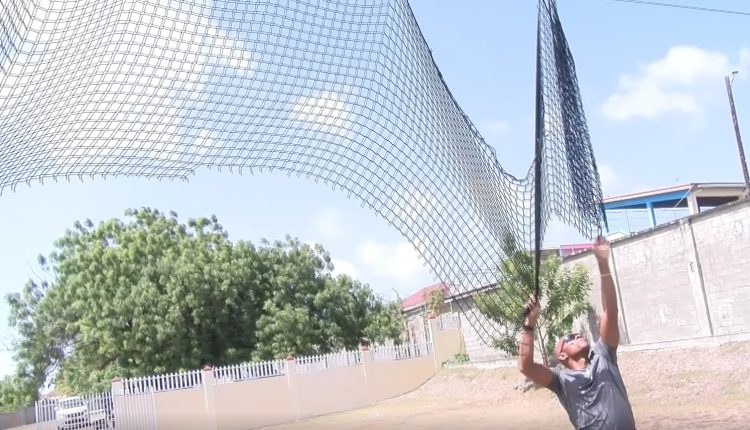 On Monday 17th May, ‘ARTIE’ sadly reported that there has been an incident of vandalism and actual theft at the Livingstone Sargeant Cricket training facility.

Arthurton noted that on Friday 14th May, as he entered the facility to commence his usual coaching program, he immediately noticed that some of the training nets had been cut and a section of one of the nets had actually vanished.

He explained that the nets are utilized for the safety of the children while they are undertaking their batting practice routines and to retain the balls used for the bowling machine, in a secured space.

He lamented the fact that the training facility is aiding in the production of outstanding cricketers, who one day may get to the highest level of the game, and now unknown person or persons have come along to thwart such efforts.

As regards the cut portion of the net, Arthurton is appealing to anyone who has expertise in repairing nets to contact him, so that the net can be speedily rectified.

As regards the missing portion of the net, he is of the mindset that that one has to be replaced.
He also pointed out that acquiring such nets is an expensive undertaking and the last set was sponsored by the Bank of Nevis, at a cost of $15,000.00.

‘They don’t come cheap and they take some time to get here,’ he lamented.

He also stated that it would be dangerous for the children to bat on the surface where the net was cut, as the area is currently not properly secured. Going forward, Arthurton is hoping that more security measures can be put in place at the facility, such as security cameras.

Former West Indies Cricket superstar, Elquemedo Willet, was also on hand, to witness the damage done to the nets and stated that he was very disappointed that someone could stoop so low, as to commit such a dastardly act.