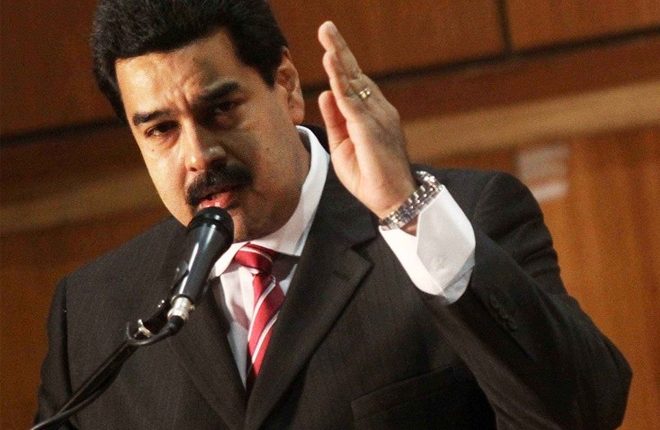 Venezuelan Leader Maduro Is Charged in the U.S. With Drug Trafficking

WASHINGTON — President Nicolás Maduro of Venezuela was indicted in the United States on Thursday in a narco-terrorism and cocaine trafficking conspiracy in which prosecutors said he led a violent drug cartel even as he amassed power.

The indictment of a head of state was highly unusual and served as an escalation of the Trump administration’s campaign to pressure Mr. Maduro to leave office after his widely disputed re-election in 2018. Mr. Maduro has led Venezuela’s economy into shambles and prompted an exodus of millions of people into neighboring countries.

Attorney General William P. Barr announced the charges on Thursday at a news briefing along with the head of the Drug Enforcement Administration, and the top federal prosecutors in Manhattan and Miami.

Mr. Maduro condemned the charges, accusing the United States and its ally Colombia on Twitter of giving “the order to fill Venezuela with violence.” He declared that he would not be defeated.

In addition to Mr. Maduro, more than a dozen others were charged, including Venezuelan government and intelligence officials and members of the largest rebel group in Colombia, the Revolutionary Armed Forces, known as FARC, which has long drawn its financing from the cocaine trade.

The chief justice of Venezuela was also charged with money laundering and the country’s minister of defense with drug trafficking, Mr. Barr said. The charges were contained in four separate indictments, two filed in New York and one each in Miami and Washington, Mr. Barr said.

The State Department is offering rewards of up to $15 million for information leading to the capture or conviction of Mr. Maduro, who remains in Venezuela, said Geoffrey S. Berman, the United States attorney in Manhattan.

One of the indictments unsealed in federal court in Manhattan included four counts, accusing the defendants of possessing machine guns and conspiring to possess machine guns in addition to the narco-terrorism and cocaine trafficking conspiracy charges.

The charges come a month after President Trump, in his state of the union address, called the Venezuelan head of state “an illegitimate ruler, a tyrant who brutalizes his people,” and vowed that “Maduro’s grip on tyranny will be smashed and broken.”

Mr. Maduro helped run and ultimately led a drug trafficking organization called Cartel de Los Sols as he gained power in Venezuela, according to court papers. Under his and others’ leadership, the cartel sought to enrich its members, enhance their power and to “‘flood’ the United States with cocaine and inflict the drug’s harmful and addictive effects on users in this country,” an indictment said.

The cartel, under the leadership of Mr. Maduro and others, “prioritized using cocaine as a weapon against America and importing as much cocaine as possible into the United States,” the indictment charged.

Mr. Maduro negotiated multi-ton shipments of cocaine produced by the FARC, directed his cartel to provide military-grade weapons to the group and coordinated foreign affairs with Honduras and other countries to “facilitate large-scale drug trafficking,” according to the indictment.

Mr. Maduro came to power in 2013 following the death of his predecessor Hugo Chávez. He vowed to continue Mr. Chávez’s socialist-inspired revolution, which redirected the country’s vast oil revenues toward the poor with government-sponsored housing, education and health programs.

Instead, the country was hit by the largest economic collapse in its history, a result of falling oil prices and years of economic mismanagement by the left-wing government. The country’s hospital system collapsed, triggering the exodus of millions of Venezuelans. Many of those who remained began street protests against Mr. Maduro, who tamped them down with an iron fist.

Mr. Maduro’s increasing authoritarianism have prompted critics to label him a dictator. In January 2019, the leader of the opposition, Juan Guaidó, declared himself president, a move that the United States and most of Venezuela’s neighbors recognized. But Mr. Guaidó was unable to wrest power from Mr. Maduro, leaving the country with two men claiming to be president.

While the United States has imposed sanctions on many of Mr. Maduro’s allies in the past, it had avoided filing drug charges against some of them because they would rule out the possibility that Washington could work with them to negotiate Mr. Maduro’s exit, said Geoff Ramsey, the Venezuela director at the Washington Office on Latin America.

“The U.S. government has been willing to cut deals with anyone sanctioned for human rights abuses or corruption,” he said. “But not if they’re implicated in drugs.”

Noting that the indictments represent a shift in American policy, Mr. Ramsey said the Trump administration likely ended its chance to broker Mr. Maduro’s exit through his top allies and made a transition to a new government less likely.

“There’s now a better chance these figures will further entrench themselves than seek any kind of deal,” Mr. Ramsey said. “Any hope of a soft landing has been torpedoed.”

The indictments made clear that the Trump administration was going to try to resolve Venezuela’s problems without Mr. Maduro, Mr. Ramsey said.

For years, watchdog groups have accused Mr. Maduro’s close aides of working with drug lords to line their pockets and prop up the crumbling state. As the Venezuelan oil industry has collapsed, Mr. Maduro’s critics have said that the drug trade is playing an increasingly important role in keeping him in power.

Last year, Mr. Maduro’s former vice president, Tareck El Aissami, was indicted in federal court in Manhattan, accused of using his position of power to engage in international drug trafficking. He had been sanctioned by the United States following similar accusations two years before.

The Treasury Department has also accused Diosdado Cabello, the former president of the National Assembly and one of Mr. Maduro’s closest allies, of narcotics trafficking “and other corrupt activities.”

And two of Mr. Maduro’s nephews are serving prison sentences in the United States following convictions on drug charges. In that case, prosecutors said the nephews — sometimes called the “narcosobrinos” in Venezuela — attempted to bring in $20 million in drug money to assist their family in staying in power.

“Stronger Together” Campaign To Highlight Importance Of Psychosocial Support During…