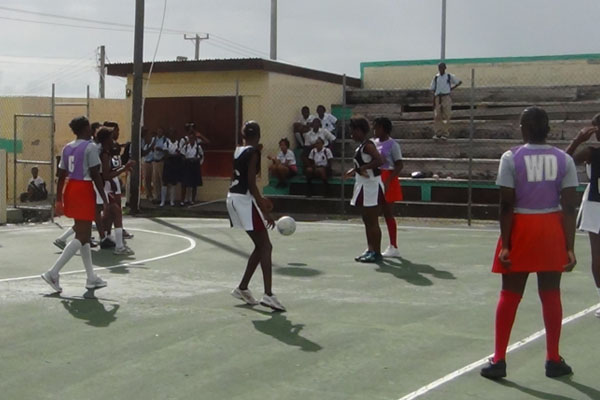 (Sports Page) The 2013 edition of the High Schools’ Netball championships continued on Monday 4th November with a match played at the Grell Hull –Stevens Netball Complex.

The Verchilds High School team travelled over by boat to engage the Charlestown Secondary School team.

The CSS team had the home court advantage and the home based support as quite a number of students and Teachers from the school, showed up to witness the match.

The Verchilds team which included three players from the St. Kitts under 16 national team, scored first but there was a quick response from the CSS team as they too notched up their first goal.

However, the match turned out to be a one sided affair as the obviously more experienced and energetic young ladies from Verchilds, virtually ran rings around their opponents.

As the 4 pm scheduled departure time for the boat neared, the Verchilds team intensified their efforts to score and when the final whistle sounded, the astonishing score line was:

The outstanding goal shoot for the match was Tessaney aka PEACHES who is a member of the St. Kitts national under 16 team. She stated that during the game she actually gave advice to the players who were marking her, towards an improvement in their game.

The accompanying Teachers with the Verchilds team, Mr. Moses and Ms Hutchinson were elated with the victory but pointed out that they were anticipating a much stiffer contest from the CSS girls.