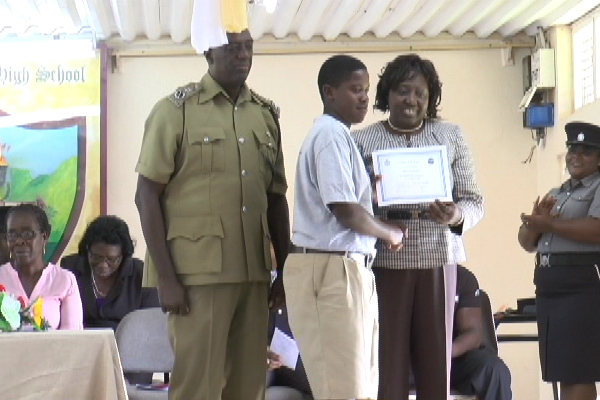 The graduation ceremony was held at the school and was attended by a large contingent from the police force including Assistant Commissioner of Police, Ian Queeley. Permanent Secretary in the Anti-Crime Unit, Her Excellency Astona Browne; Chief Education Officer Clarice Cotton; and Principal of the Verchild’s High School Mary Clarke also attended the graduation ceremony.

As part of the TAPS Academy, students learned how to interact with the police and recognise that police officers are their friends.

Superintendent Rosemary Isles is the Director of the programme. She spoke of how students can be impacted.

She said, “I believe that this partnership between police and teens will make a positive difference in the lives of our young teenagers. TAPS was introduced into our Federation by Dr. Penn and Chief Lumpkins who brought their success story to us all the way from Texas, USA. Immediately, I saw the potential of this programme to give our teens a fighting chance against the ills that now plague our community.”

Isles recorded appreciation to the police officers who were instrumental in the process. She added that several senior government officials have contributed to the programme’s success to date.

“We are thankful for the assistance, advice and guidance received from the Prime Minister, the Right Hon. Dr. Denzil L. Douglas and the Anti-Crime Unit, the Commissioner of Police Mr. C.G. Walwyn, Mrs. Clarice Cotton Chief Education Officer, and Mrs. Clarke Head Teacher of the Verchild’s High School who insisted that this programme was a must for our school,” Isles said.

Commissioner Walwyn said he was proud of the programme and its participants and said everyone should feel a sense of pride.

The Taps Programme was introduced to St. Kitts in September and the police force believes that so far, a great relationship has been built between police officers and teenagers.