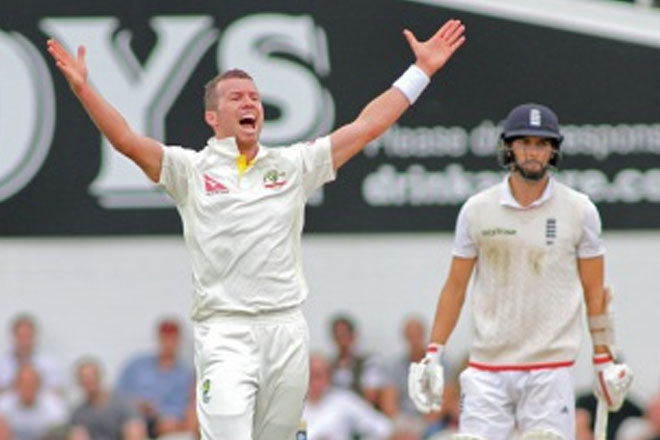 Victory sends off Clarke and Rogers on a high

Sports Page — A flirtatious Ashes series which has often been seductive without delivering much in the way of long-term commitment, so much so that the urn might have been sponsored by Ashley Madison, lent its loyalties for the final time to Australia as they claimed the fifth Investec Test by an innings and 46 runs.

There has been much to enjoy over the five Tests in a series watched by capacity crowds – and lovers of Test cricket will delight in that – but history is likely to judge this hit-and-miss series one of the more insubstantial affairs between two teams possessing striking inconsistencies – loved for their skill, unlikely to be hailed for their resilience.

Alastair Cook, England’s captain, will make light of that, content that after a 5-0 whitewash in Australia the Ashes have been regained. “I honestly believe this is a highly-talented group of players,” he said. “Being underdogs helped us and allowed us to play with a bit of freedom. It has been a very different Ashes series: two-and-a-half day Test matches with one side getting on top and the other unable to respond, but I am very proud of the lads.”

As if to reveal this trait, all five matches have been one-sided. There has been entertainment aplenty but little tension. As well as this victory margin – an innings and 46 runs, Australia found further consolation in London when they won by 405 runs at Lord’s. England dominated by 169 runs in Cardiff, eight wickets at Edgbaston and an innings and 78 at Trent Bridge. The ability to fight back in adversity has been strangely lacking. It has not been a series to be holding tickets for the final day.

Rain delayed Australia for nearly three hours on the fourth day – not many batsmen on either side can claim to have done that to bowlers during this series – before Peter Siddle, appearing in the final Test like a battle-hardened guest star from a more sober age, took the last two wickets to finish with 4 for 35 and 6 for 67 in the match.

England’s winning margin was clipped to 3-2 and properly so. Stuart Broad, the leading wicket-taker in the series, is followed by four Australians. Joe Root is the only England batsman in the top four run-makers.