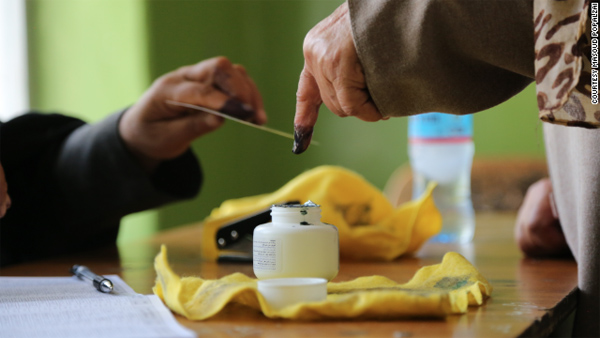 Kabul, Afghanistan (CNN) — Afghans have finished casting their ballots to pick a president in a runoff election between former Cabinet ministers.

In general election on April 5, Abdullah secured 45% of the vote, while Ghani got 31.6%. A candidate needs to receive more than 50% of the votes to win the first round and avoid a runoff.

Counting of votes has already started in some provinces, including northern Balkh and southern Kandahar, Afghan election officials said. Some 7 million turned out to vote in the April 5 election, but there was no immediate information available about Saturday’s turnout.

The results will be announced on July 22, the election commission said.

It’s the third election since the fall of the Taliban in 2001, and is set to be the first democratic transfer of power in the fragile, war-torn country.

After casting his own ballot, President Hamid Karzai gave a short speech urging other voters to head to the polling stations, the presidential palace said. Their participation would help lead to “stability and a prosperous life” in the country, he said.

“In reality, today is the day that Afghanistan is stepping from a transition period to stability, development and peace,” he said.

“Today is your day to come out and save your soil from being ruined, bring stability to your country, brighten its future, choose your president and found the future of children of this soil by your vote.”

Abdullah was a vocal critic of the Taliban during their years in power. Although he was once an ally of Karzai, serving in his government as foreign minister, he has in later years become an opponent.

He challenged Karzai in the 2009 election but dropped out after the first round to protest what he said was large-scale voting fraud.

Ghani is a former academic and U.S. citizen who gave up his passport to run for the Afghan presidency in 2009. He worked as an adviser to Karzai and also as finance minister in his Cabinet.