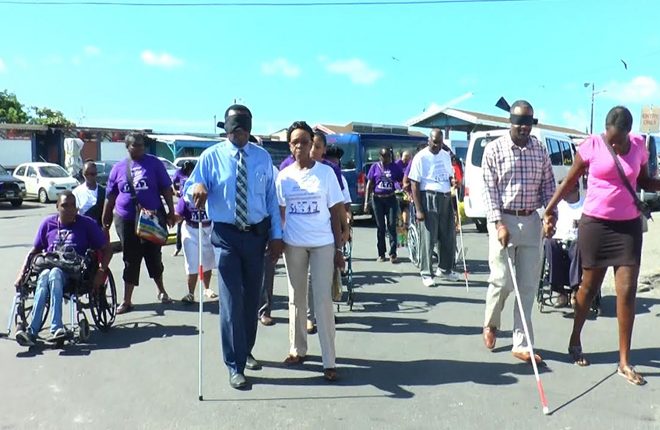 “Walk In My Shoes”

(ZIZ News) — An event entitled “Walk In My Shoes” on Wednesday morning give able-bodied persons a firsthand look at what it’s like to live with a disability.

They were blindfolded at the Ferry Terminal and, led by volunteers, taken on a brief march through the streets of Basseterre.

Along the way a few others joined the procession and were either blindfolded or sat in a wheelchair.

The march ended outside Government Headquarters where ZIZ News spoke with some of the volunteers about their experience.

Gloria Esdaille Robinson, a senior official at TDC travelled most of the length of Church Street in a wheelchair and said “It takes a lot of work, a lot of thinking to manage if you’re constantly having to manage a wheelchair. So kudos to those who have to do this on a daily basis.”

Diane Pemberton a supervisor of the People’s Employment Programme said “We see them on a daily basis and not knowing how difficult it is at times. And they do it without complaining, without murmuring. They do it because they are living it. And I think we, as a society in St. Kitts and Nevis, should be more supportive of them.”

Calypsonian Sylvester “Socrates” Hodge said as a diabetic he’s aware blindness is a possibility so this event was especially meaningful for him.

“To be asked to portray a blind person it impacted me because I’m aware of it, I’m trying what they can do but I don’t live in the shoes of those who go through this every day so there’s empathy and understanding of what they go through to a certain point, because I have not lived it,” he said. “But for those afflicted by diabetes they would have seen this demonstration and should do all they can to avoid this. And me more mindful, more kind to those are in this current situation.”

“Sometimes we sit back and we say certain people can do this and can do that when we have never lived their situation. And it doesn’t necessarily have to be about those persons who are blind or those who are hard of hearing or those with some other disability. Sometimes people have their own particular situations which put limits on them and we must learn to appreciate that and appreciate their differences and appreciate what they have to live with,” he said.

Minister of Social Services, The Hon. Eugene Hamilton commended the association on hosting the event and making a statement outside Government Headquarters.

The event forms part of the week of activities organised by the Association of Persons Living with Disabilities.

The goal is to raise awareness about the daily challenges that persons with disabilities face and encourage discussion on issues that affect them.