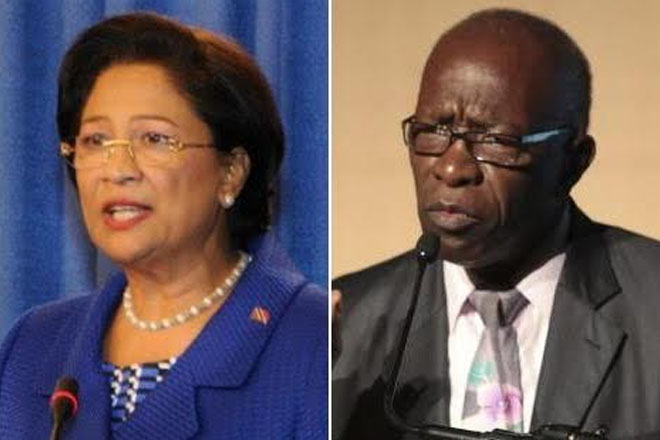 Warner is a stranger to the truth, says Trinidad PM

Port of Spain, Trinidad — Following a press conference on Tuesday held by corruption accused Jack Warner that Trinidad and Tobago Prime Minister Kamla Persad-Bissessar described as “a damp squib littered with lies and more lies”, she went on to call Warner “a stranger to the truth”.

At his press conference, Warner read from a sworn statement dated May 29th, 2015, two days after he had been indicted in the US on multiple counts of racketeering, corruption and money laundering and his arrest in Trinidad.

In his statement, Warner claimed that, in an effort to appease the US government and more so to neutralize a powerful political opponent with the capacity to lessen her party’s chances at the upcoming general elections, Persad-Bissessar believes that a golden opportunity has arisen for her to get rid of him based on the US charges.

“It is against the latter background that, within 15 minutes of the receipt of the provisional warrant for my arrest, the prime minister instructed her attorney general to sign the US document in an attempt to get me out of Trinidad and Tobago, without giving me the opportunity of due process,” Warner alleged.

However, according to Persad-Bissessar, she gave no instructions to the attorney general to sign Warner’s extradition.

“In fact nothing has been signed by the attorney general to date. Another lie,” she pointed out.

Persad-Bissessar said she was responding at the earliest opportunity in the hope this will ensure that these outrageous claims by Warner are treated with the contempt they deserve.

“Let me state very clearly and unequivocally that these accusations are false and without any foundation whatsoever,” she said.

She expressed the hope that observers will by now have noted the pattern of increasingly farfetched claims being made by Warner and how quickly each set of his claims unravels once the facts are known.

“Everybody knows his present plight and why he is becoming so desperate. He is a stranger to the truth,” she said.

She encouraged Warner take his allegations to the Integrity Commission as he and others have done before and for which she has been cleared on every occasion.

“Let him take his allegations to the police with the evidence he claims to have. This will put a stop to this nonsense. I have asked my lawyers to review today’s press conference and take the requisite action to stop this malicious misinformation once and for all,” Persad-Bissessar said.

She said she does not intend to waste any more time on Warner’s behaviour and claims.