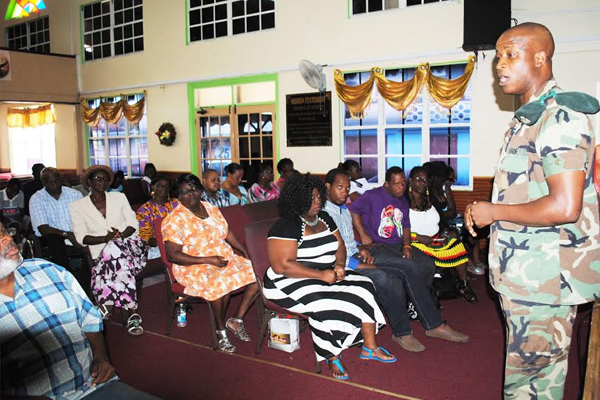 Basseterre, St. Kitts (December 22, 2014) — Members of the St. Kitts Nevis Association of Persons with Disabilities (SKNAPD) on Thursday December 18 learnt that they are appreciated by the Defence Force, are favoured by God, and that a federal parliamentary candidate will fight for them when he gets elected.

This happened at a ‘Thanksgiving Ceremony’ held at the Word of Life New Testament Church on Central Street, Basseterre, to celebrate the birthday of Corporal Joseph Bergan of the St. Kitts and Nevis Defence Force, and that of Ms Sharon Fredrick who is a member of the PEP Microsoft Office Class at the McKnight Community Centre.

Captain Kayode Sutton, Public Affairs Officer of the St. Kitts Nevis Defence, surprised all gathered when he informed them that even though Corporal Joseph Bergan is no longer in active duty due to the injury that rendered him paralysed some nine years ago, that he was still a member of the force.

“Bergan was discharging his legitimate duties when he met the situation that left him in the state that he is now,” said Captain Sutton, who was representing the Force Commander Lt Col Patrick Wallace. “He is struggling to walk. This happened about nine years and 17 days ago today (Thursday Dec 18).

“We have not turned our backs on him. All avenues to correct his disability have been exhausted and he is much better than when he actually had the accident – when he was shot. He is able to walk now with the assistance of a cane. He is still a member of the force; actually since the unfortunate incident he has been promoted.”

According to Captain Sutton, Joseph Bergan who is also the Vice President of the St. Kitts Nevis Association of Persons with Disabilities was promoted to the rank of corporal from lance corporal the position he held when he suffered gunshot wounds.

“This kind of service is quite encouraging to know that people with disability in the society are not forgotten,” pointed out Captain Kayode. “It is very easy to overlook them and just cast them to the side and move along, everything is fast paced. So to have a service of this nature, at this particular time of the day, dedicated to them is something honourable.

“I came here to represent the Commander of the Defence Force Lt Col Patrick Wallace and he will certainly be very happy to hear because when I get back I will give him a feedback as to what happened. We support it, we encourage it and we will continue to support persons within the society who have disabilities just like we support our own.”

The service was officiated by Bishop Matthew Hepburn who told members of the SKNAPD that they have the favour of God. He gave the biblical example of Mephibosheth a grandson of King Saul who was crippled at age five when dropped by a nurse as she was running away.

He was in his later years invited to dine at the palace with King David. “When he sat at the table, you could not see his disabled legs,” said Bishop Hepburn. “While sitting at the table, no one could have seen his disability, because the disability was under the table.”

In his address, the President of the Association Mr Anthony A. Mills lamented that most persons look at a person with a disability and they automatically see the things they can’t do and tend to somehow miss the things they can do.

“As a person with a disability I can attest to you that there isn’t a whole lot of things I can’t do,” said Mr Mills. “The only disability really is a bad attitude. We are most of the times disabled by our environment and by the people we meet. As a result a lot people with disability are left behind.”

He observed that people with disabilities are people first. He however disagreed with the fact that they are often called special people.

“If I were special, I would be able to go to any place I want to go, I wouldn’t have sidewalks that I can’t get on, I won’t have Basseterre that I do not have access to,” lamented Mr Mills. “I do not feel that special when I do not have full access. Persons who are blind do not feel that special when information is locked from them because it is not disseminated in a form they can read like braille.”

He threw an open challenge to St. Kitts and Nevis Labour Party Candidate for Constituency Three, Mr Konris Maynard who had attended the service, to ensure that once he got elected that he would try to make people of that constituency with disabilities have access, be equal to the rest in the community, have access to communication, access to technology, and access to the physical environment.

“Those are the things I would like to see you when you get there work hard for us,” implored Mr Mills. “Help us to get the Convention on the Rights of Persons with Disabilities signed and ratified. Help us to get our building code revised as it is outdated. If that can happen, the whole society would benefit.”

In reply Mr Konris Maynard assured them that when building his Constituency Office, he built a ramp so that his office could be accessed by those with disabilities. He observed that a member of his family has a form of disability but they do not see that member as being disabled.

“I am keenly aware of the environment and the things that persons with disability may have to go through,” said Mr Maynard. “You have a committed solder who is going to fight on your behalf to make sure that things like the building codes etc. are looked into as you say they are outdated and, that we consider everyone in our society.”

Presenting Ms Sharon Fredrick with a fruit basket, Mr Maynard said: “I give great credit to the organisation for taking this type of initiative to honour everyone in our society.”