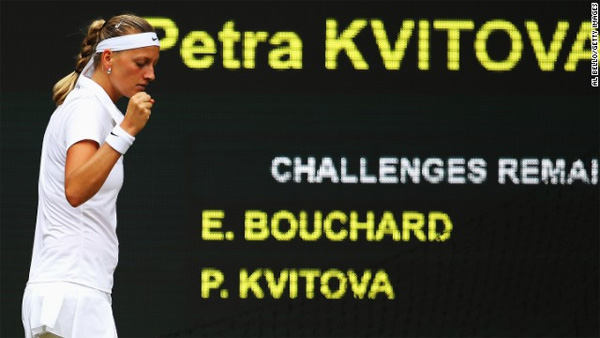 (CNN) — It all seemed in place for Eugenie Bouchard in Saturday’s Wimbledon final.

She was the people’s favorite, surged to semifinals at the Australian Open and French Open, and Princess Eugenie — who the tennis player was named after — looked on from the Royal Box.

Ten years ago, Bouchard’s idol, Maria Sharapova, won Wimbledon as the 13th seed. And yes Bouchard, who shares the Russian’s enormous appetite for titles and competitiveness streak, was seeded 13th this fortnight.

But Bouchard’s coronation will have to wait, since none of the above mattered to Petra Kvitova.

Canada, too, will have to wait for a maiden grand slam singles champion.

Kvitova became the Queen of Wimbledon once again when the powerful, left-handed Czech crushed Bouchard 6-3 6-0 in a mere 55 minutes for a second crown at tennis’ most prestigious tournament.

It was the most lopsided Wimbledon women’s final since Steffi Graf routed Monica Seles 6-2 6-1 in 1992, not what anyone expected given Bouchard’s battling qualities.

“I had great tactics from my coach and I just wanted to (win again),” Kvitova, the 2011 champion, told the crowd.

Closing the roof for the trophy presentation took almost as long as the second set.

“I don’t know if I deserve all your love today but I really appreciate it,” Bouchard told the crowd.

No matter what happens in the months leading into Wimbledon, Kvitova appears to instantly feel at home at the All England Club.

Whereas Kvitova hasn’t reached a grand slam quarterfinal outside Wimbledon since the 2012 French Open, she’s progressed to at least the last eight at tennis’ most famous postcode of SW19 five straight times.

Her flat, booming ground strokes thrive on the grass, and the lower bounces are to her liking. With rallies generally shorter, she doesn’t have to hit as many balls — so can limit her unforced errors.

Bouchard simply didn’t face anyone of Kvitova’s calibre this tournament.

An aggressive player, even Bouchard took a backseat in that department to Kvitova, but that was little surprise since the latter always does the dictating.

Not known for her scampering, Kvitova for good measure won the point of the final when she retrieved like Rafael Nadal and struck a slice backhand passing shot winner to hold for 3-1 in the first.

Her running forehand cross-court pass deep in the second was almost as good and Kvitova ended matters with a sizzling cross-court backhand winner prior to raising her arms and falling to the grass.

On this form, it won’t be the last time Kvitova celebrates on Centre Court.

“I hope it’s now going to be easier for me” to win further grand slam titles, Kvitova said.

Once Kvitova broke for 2-1 in the first set, she was never threatened.

Bouchard saved three break points to hold for 2-3 — but it was her last hold. The second set took 23 minutes, with Bouchard claiming 10 points total.

But the duo will have a difficult job of matching Kvitova’s impeccable display.