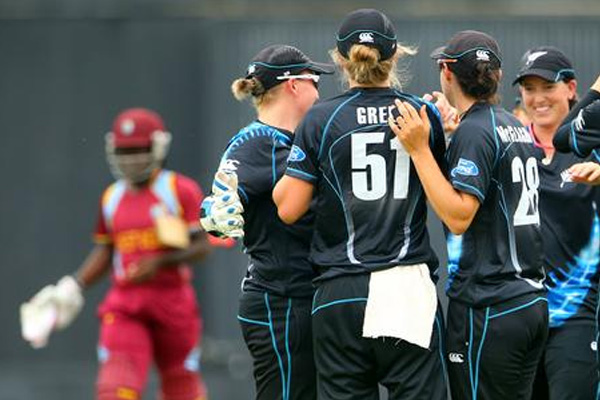 Chasing 93 for victory, New Zealand Women strolled to their target off 17.5 overs to take a 1-0 lead in the three-match series.

Sent in, the Windies women plummeted to five for three and were crumbling despite a Stafanie Taylor sponsored fight back with a top score of 43 which sought to rekindle the innings but Neilson’s early wickets had already done irreparable damage.

New Zealand lost an early wicket on the chase but powered by an unbeaten 44 from opener Rachel Priest, recovered well to lead the visitors to a comfortable victory with 13 balls to spare.

Neilson grabbed three wickets for 11 runs – opener Taylor, Kycia Knight and the aggressive Deandra Dottin – to help restrict the homeside to 92 for six off their 20 overs after New Zealand had won the toss and elected to field.

Taylor played well to lead efforts to reenergize a struggling innings and received support from Britney Cooper who contributed 20.

New Zealand’s innings suffered an early setback when Shanel Daley uprooted Captain Suzie Bates’ stumps for a duck with no runs on the board.

However Rachel Priest took charge of the innings with a confident 44 not out to lead her side to victory and a one nil lead in the three-match T20 series.

Priest was assisted by Sophie Devine who got to 24 before losing her stumps to Anisa Mohammed who picked up one wicket, same as Daley and Shaquana Quintyne.

The victory was New Zealand’s first against West Indies on their current tour after losing the One Day International series four-nil.

Daley; Quintyne and Mohammed 1 wicket each