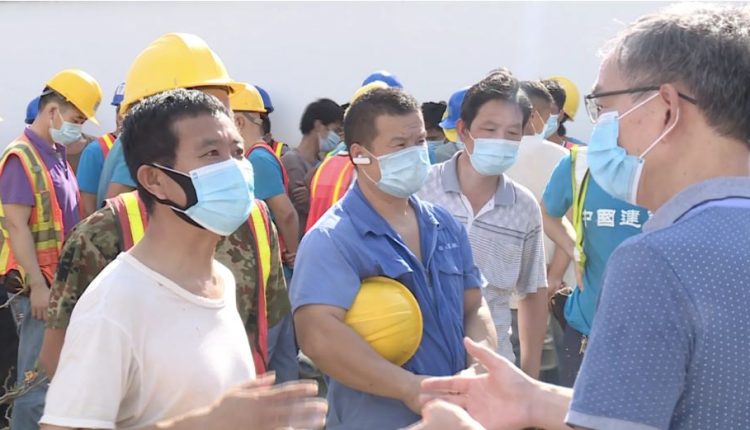 Workers In The Bahamas Protest At Chinese Embassy, Demand To Return Home

NASSAU, BAHAMAS , September 2nd 2020 (EyeWitness News)— More than 100 Chinese workers of The Pointe demonstrated in front of the Chinese Embassy in Nassau, expressing a desire to return home as work on the downtown project nears completion and cases of coronavirus continue to surge in The Bahamas.

The workers, clad in hardhats and construction vests, had what appeared to be a brief, but heated exchange in Mandarin at one point with embassy personnel, before officials managed to calm the large group.

Some of the protestors recorded from the sidelines.

Others sat on the grass in front of the embassy in silence, their masks covering their faces.

Many of them declined to be interviewed, while few attempted to speak to reporters in Chinese.

In a video circulating on social media, purporting to show scores of workers demonstrating in front of The Pointe, a worker said in broken English: “All Chinese man have to go [back] to China. No give Chinese man. Why? Why? Have to go back China. Why? All people want to go.”

Several police officers monitored the situation from across the street.

Speaking to the media, Counselor at the Chinese Embassy Haigang Yin said workers from China Construction America’s development The Pointe were “anxious” to go home now that the project was nearing an end, and there were also concerns about their safety amid a rising number of cases of COVID-19 in The Bahamas

He said the embassy and The Pointe were working to arrange a chartered flight for an estimated 200 workers, though he was unable to say how soon the flight would be arranged.

“They said there is anxiety to go back to China,” Yin said.

“The embassy explained the situation, including that there [are] no international flights available, but the embassy and the Chinese company are working together to bring them back.

“We are considering to arrange a chartered flight to bring them back.

“And also, the company promised to improve their personal protection against the virus and the workers are quite satisfied.”

The protestors eventually left the area.

According to Yin, the workers have been in The Bahamas for over six months, and in some cases more than a year.

COVID-19 originated in Wuhan, China, in December, but the country has since largely returned to normal having reigned in the spread of the virus.

Cases of COVID-19 have continue to surge daily in The Bahamas, particularly in New Providence.

As of yesterday, there were 2,217 confirmed cases of the virus — with 1,378 cases in New Providence.

As it relates to The Pointe project, Yin said it was progressing well.