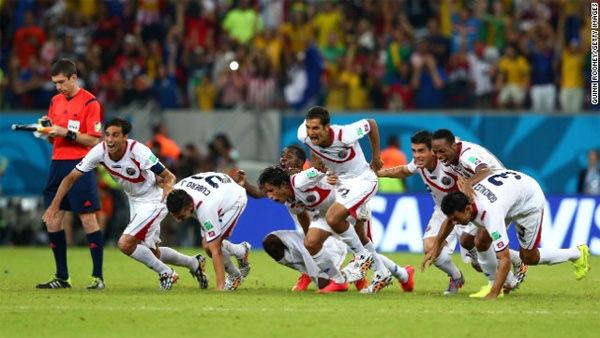 Perhaps nobody was listening. Perhaps they didn’t want to.

For all of the joking and laughing that Costa Rica would simply turn up in Brazil to make up the numbers, there were those who knew the reality would be different.

“Think big” is the motto that Costa Rica coach Jorge Luis Pinto has always subscribed to.

And the Colombian practices what he preaches — qualification from the group stage was always going to be achieved if you speak to those within the Costa Rican camp.

Bravado? A fool’s hope? No, this is a side which plays with a belief that comes straight from the very top and trickles through the veins of its players.

But it would be foolish to claim that this team has only succeeded because of the spirit which Pinto has engendered — it has talent too, lots of it.

Greece, also playing in the last 16 of the World Cup for the first time, fell the way of Uruguay and Italy on Sunday, beaten by a side playing with a confidence and belief that appears to be unshakable.

With the game having reached penalty kicks following a 1-1 draw inside 120 minutes, both sets of players had already given everything they had.

Costa Rica’s players, who had already suffered the ignominy of having victory snatched away from them, appeared to be running through treacle as they dragged their tired limbs down the field, stretching every muscle and sinew.

But having survived to make it through to penalties, those same players found the strength and skill to write yet another chapter in this incredible tale.

All seven players had scored and, with his side trailing 3-4 in the shootout, Theofanis Gekas strode towards the penalty spot.

But there was a look in his eyes — fear. Time appeared to stand still. The 34-year-old looked at the ball, looked at the goal — but that look of trepidation never left his face.

Perhaps Navas had noticed, perhaps he hadn’t. It mattered little. For when Gekas stepped forward and placed the ball to the goalkeeper’s right, Navas flew across to palm the ball away.

Forward came Michael Umana — a 31-year-old defender who plays in his home country with Deportivo Saprissa.

He placed the ball down, a piece of grass stuck to his cheek courtesy of the sweat which dripped from his brow.

He drew a breath. There was no shimmy, no stutter, no hesitation. As the ball hit the back of the net, those in white shirts forgot the aches and pains which had left their limbs in agony.

Whereas moments ago they could barely walk, now those men draped in the flag of Costa Rica danced their way into the Brazilian night.

“It seems untrue. I was relaxed because I dreamed it. I dreamed it but I didn’t tell anyone. I felt very confident.

“This is for my family. It’s for the colleagues who got injured before coming here. They’re not with us, but they gave us a hand on the pitch.”

In the end this proved to be a rather exciting contest — a world away from what was served up in the opening 45 minutes.