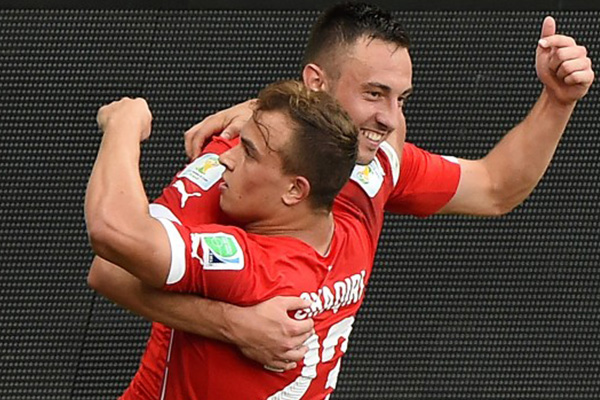 CNN — Switzerland might not have the magic of Lionel Messi, but in Xherdan Shaqiri it has a player who is desperate to shine on the biggest stage of all.

The Bayern Munich star scored a hat-trick to help his nation book a last-16 tie with Messi’s Argentina at the World Cup, following Wednesday’s 3-0 win over Honduras in Manaus.

The Swiss finished with six points from three matches, one behind group winner France, which drew 0-0 with Ecuador.

France, which faces Group F runner-up Nigeria in the next round, wasted a number of good opportunities against a side which played the majority of the second half with 10 men.

Switzerland, ranked sixth in the world, won its opening game before suffering a 5-2 thrashing by the French.

But it bounced back against Honduras with the impressive Shaqiri stealing the sow.

The diminutive midfielder curled home the opener on six minutes and then ran clear to add his second before the break.

Shaqiri then rounded off a counterattack with 19 minutes remaining to seal the win, his third set up by Josip Drmic.

It was all too much for Honduras coach Luis Fernando Suarez who told reporters he would leave his role after losing all three group games.