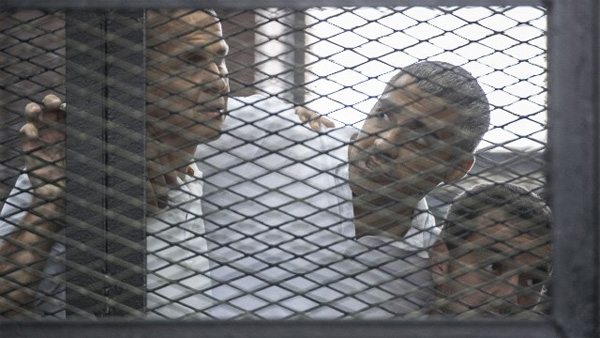 (CNN) — Monday began on an optimistic note for many of the journalists who had campaigned for the release of three imprisoned Al Jazeera English journalists in Egypt. They expected that the journalists — Peter Greste, Mohamed Fahmy and Baher Mohamed — would be freed after nearly six months behind bars. “Make this freedom day,” Al Jazeera correspondent Sue Turton wrote on Twitter.

Alex Thomson, an anchor for Britain’s Channel 4 News who’d carried masking tape with him for months and posted dozens of Twitter photos of his mouth duct-taped in a dramatic show of solidarity with the Al Jazeera journalists, had taken a picture of a full roll of tape and written hopefully Sunday, “Goodbye to all this? Verdict is tomorrow.”

But after the verdict was read, and the three journalists were sentenced to seven-plus years in prison, Thomson adorned the duct tape once again and posted a new photo. He captioned it, “Depressing day for freedom of speech.”

Thomson’s point of view was shared by reporters, producers and editors the world over. Staffers at the BBC planned a minute of silence Tuesday morning to demonstrate support for their counterparts at Al Jazeera. CNN called the sentencing “unjust” and said in a statement, “We stand alongside the journalistic community in calling for the immediate release of these journalists.”

Officials in the United States, Canada, United Kingdom, Australia and other countries criticized the sentencing, and U.S. Secretary of State John Kerry urged Egypt’s President to consider “all available remedies, including pardons.”

However, President Abdel Fattah el-Sisi said Tuesday that he would not intervene in the case, Egypt’s state-run Al-Ahram news website reported.

“I will not interfere in the verdicts of the justice system because the Egyptian judiciary is independent and proud,” the President said, speaking at a graduation ceremony at the Military Academy in Cairo.

He added that “no one should comment or speak about the state’s institutions, and we should adhere to the verdicts of the justice system even when others don’t understand it.”

The Egyptian Foreign Ministry also defended itself Monday amid the international condemnation, saying it “strongly rejects any comment from a foreign party that casts doubt on the independence of the Egyptian judiciary and the justice of its verdicts.”

An editorial in Tuesday’s New York Times called the convictions “the latest effort by the country’s military-backed rulers to crush all dissent.” The Times noted that “the defendants are allowed to appeal the verdicts, but the process could take years.”

On Tuesday morning, one of Greste’s brothers, Andrew, said he would be visiting him in prison. Peter Greste had previously worn white clothes during the trial, but now, in accordance with Egyptian standards for convicted prisoners, “he’ll be dressed in blue,” Andrew wrote on Twitter. “It’s going to be tough.”

Turton, who was at Al Jazeera’s headquarters in Doha, Qatar, on Monday and sentenced in absentia to 10 years in an Egyptian prison, said in a televised interview that Monday’s verdicts were “heartbreaking.”

“We really thought we could trust the Egyptian judicial system to be fair,” she said.

Other Al Jazeera journalists spoke out with ferocity on Twitter and other social networking sites.

Correspondent Anita McNaught reacted to the verdict by tweeting, “Wrong. Wrong. Wrong. Mad. Wrong. Peter, Baher and Mohamed did nothing to deserve this #Egypt.”

Correspondent Alan Fisher wrote, “Every journalist in the world should be concerned about the message this sends.”

James Bays, the network’s diplomatic correspondent, urged his colleagues to remember the “sense of anger and injustice today, and campaign every day until we get them out.”

That’s what Al Anstey, the managing director of Al Jazeera English, promised to do. He said in a statement Monday that the Egyptian court’s ruling “defies logic, sense, and any semblance of justice.”

Using the hashtag adopted by the network and its supporters, he wrote on Twitter, “Thank you for your support to #freeajstaff. Keep it going. We will continue with resolve till Peter, Baher and Mohamed are free.”

Lindsey Hilsum, the international editor for Channel 4 News, who was in Baghdad on Monday, posted a picture of herself there with her face gagged, like Thomson with his duct tape.

“Some say we campaign more about unjust imprisonment of journalists than others,” she wrote on Twitter. “But if we are silenced, how will you know about the rest?”