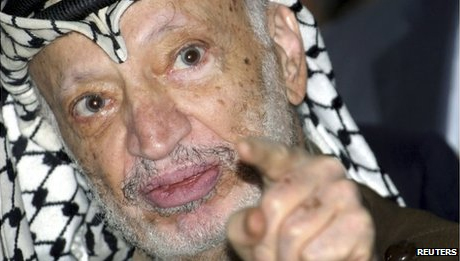 Yasser Arafat ‘may have been poisoned with polonium’

(BBC) The late Palestinian leader Yasser Arafat may have been poisoned with radioactive polonium, says a Swiss forensic report obtained by al-Jazeera.

Arafat’s official medical records say he died in 2004 from a stroke resulting from a blood disorder.

But his body was exhumed last year amid continuing claims he was murdered.

The Swiss report said tests on the body showed “unexpected high activity” of polonium, which “moderately” supported the poisoning theory.

Many Palestinians and others have long believed that Israel poisoned Arafat. Others allege that he had Aids or cancer. Israel has consistently denied any involvement.

A spokesman for the Israeli foreign ministry said the Swiss investigation was “more soap opera than science”.