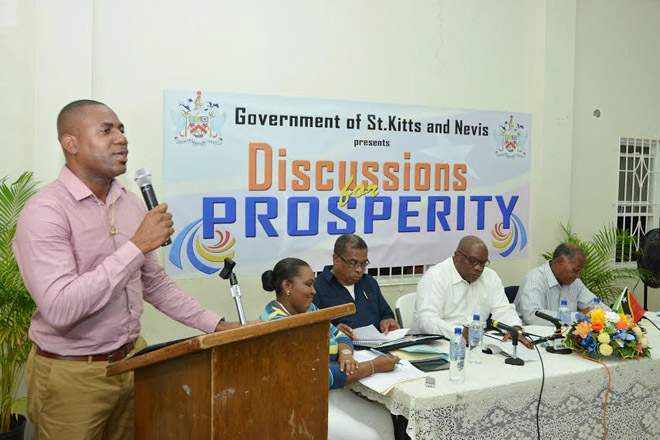 (SKNIS): Deputy Prime Minister and Minister of Education, Honorable Shawn Richards, announced at the July 25th, 2016 “Discussions for Prosperity”, town hall meeting, held at the Newtown Community Centre, that $10 million have been allocated to the building of the brand new Basseterre High School (BHS).

The minister said that there have been a number of questions posed in relation to where the new school will be located. He took the opportunity to explain to the listening audience the initiatives put in place to move the project forward.

“In the first instance, we put a committee together comprising of various stakeholders to help us to determine a site, but before that committee was put together, we sent correspondence to the Sustainable Development Unit asking them to recommend possible sites for a brand new BHS,” said the minister. “The Ministry of Sustainable Development provided us with five possible sites for a brand new BHS including a site in Shadwell, an area just opposite of the University of Health Sciences, the old BHS, an area just next to TDC and an area in Needsmust.”

The minister added that the committee was given that information and asked to look at all the sites and to provide an evaluation. A number of concerns were raised from each area including proximity, disturbance from the airport, relocating a number of mechanics, building on an area designated as the Basseterre Valley National Park, which is also the location of an aquifer, and psychological issues which may arise even if the old school is knocked down and rebuilt.

The Cabinet also decided to put a next committee in place to look at the various sites as some of the issues were technical in nature, said the minister.

“For example if you look at the Ponds Site and the Needsmust Site, there are issues over there that involve the water table. And so a committee of water experts was put together to do an evaluation of those particular sites and to give the Cabinet some guidance as to if you build a school in that area, what will you have to do in order to mitigate against the concerns over there.”

The education minister then asked the committee to reconvene and to give the government an indication of which site it thinks would be the best just as the first committee did and ranked them.

Cabinet has since then looked at the report and indicated to Sustainable Development the findings from the technical persons and experts.

A next report will be provided to indicate whether to move the mechanics who are conducting business on a piece of land in Shadwell, which is about 13 to 15 acres. Also in the report would be where to move them to, what is the cost of moving them and other factors.

“The Cabinet would have to take those factors into consideration in making a decision,” said the deputy prime minister. “And so I am awaiting that report from the PS for Sustainable development.”

The government has given its commitment that before the end of this year construction of the new BHS will start.