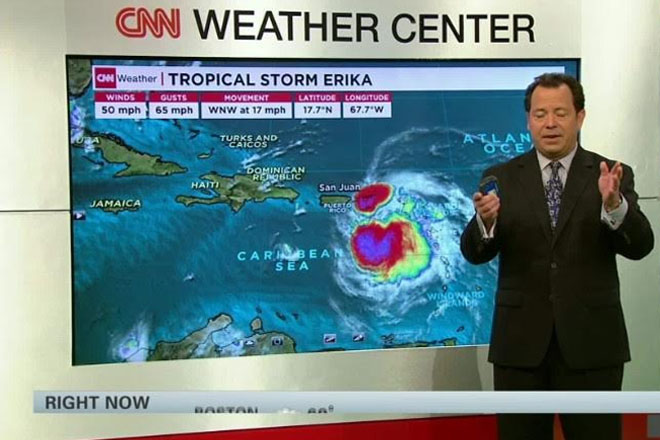 Erika’s center was headed toward the Dominican Republic on Friday morning, according to the U.S. National Hurricane Center. Rain from the storm also affected the Virgin Islands and Puerto Rico, the center said.

“The very latest is not what you went to bed with last night,” CNN meteorologist Chad Myers said Friday. “This is going to be a rainmaker — it’s not going to be a wind-maker that blows every building down.”

Erika is expected to remain a tropical storm as it approaches South Florida on Monday. However, the hurricane center said conditions are volatile and they could change in the coming days.

Florida Gov. Rick Scott declared a state of emergency as the storm heads toward his state.

He expressed particular concern for Petite Savanne, a community hit by mudslides that rescuers haven’t been able to reach yet.

“This is where many are feared lost,” Skerrit said.

Authorities are focusing on search-and-rescue efforts, with other countries in the region providing helicopters and other assistance.

Skerrit said the task of repairing Dominica’s “dramatically affected” infrastructure would come later, estimating that the cost of fixing homes, roads, bridges and other structures would run into tens of millions of dollars.