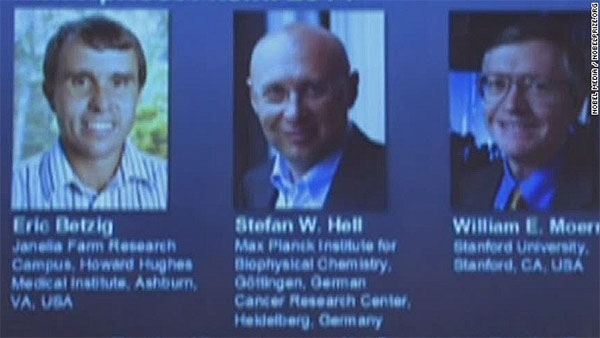 (CNN) — Two Americans and a German won the Nobel Prize in chemistry this year for their work on optical microscopy that has opened up our understanding of molecules by allowing us to see how they work close up.

Back in 1873, science believed it had reached a limit in how much more of a detailed picture a microscope could provide. At the time, microscopist Ernst Abbe said the maximum resolution had been attained.

“Due to their achievements, the optical microscope can now peer into the nanoworld,” the committee said.

The importance can’t be overemphasized: Now, scientists can see how proteins in fertilized eggs divide into embryos, or they can track proteins involved in Alzheimer’s or Parkinson’s diseases, the committee said.

Hell, of the Max Planck Institute for Biophysical Chemistry, Göttingen, and German Cancer Research Center, Heidelberg, both in Germany, developed a way to use two laser beams to make individual molecules glow on and off.

Speaking to the Nobel committee by phone after the prize was announced, Hell said the development of nanoscopy was “very important to life scientists” because the use of focused light is the only way to see how the body works at a cellular level.

He said he was “totally surprised” by the call from the Nobel committee and that it took a while for the news to sink in.

Betzig, of the Howard Hughes Medical Institute, in Ashburn, Virginia, and Moerner, of Stanford University in California, worked separately to develop the basis for single-molecule microscopy.

This uses light to make individual molecules glow and allows a dense super-image to be resolved at the nanolevel.

Committee chairman Sven Lidin said that thanks to their development ofsuper-resolution fluorescence microscopy, cells could be studied close up and the boundary between chemistry and biology had blurred.