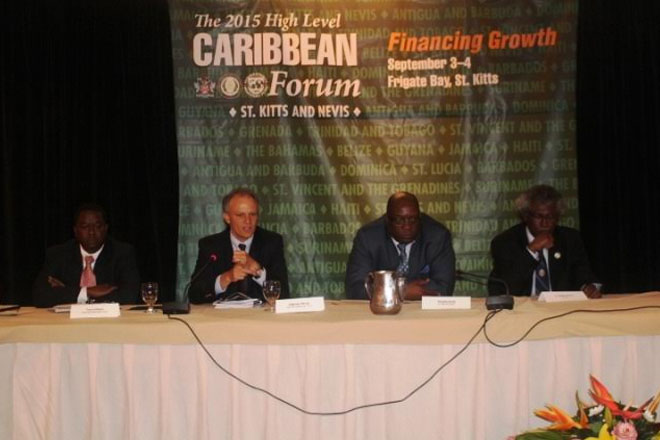 (ZIZ News) — Two days of intense discussions on financial growth in the region concluded on Friday at the 2015 High Level Caribbean Forum.

The meeting, which began on Wednesday evening, addressed issues such as reducing energy costs, financing infrastructure and improving access to credit for the productive sector.

Speaking at a media press conference subsequent to the discussions, Governor of the Eastern Caribbean Central Bank [ECCB] Sir. K. Dwight Venner said while making policies is ongoing, progress has been made in several areas of discussion.

“But above that, it’s this continuous dialogue which strives to make sure that you’re on the right track, that people like the IMF and the World Bank who have experience in these areas, so that our policies do not go off track,” he said, adding that, “We’ve made some progress for example in energy where we say Geothermal is important and we have to find means of financing it.”

“There are discussions we have to follow up on and in banking, there are issues of access to credit which of course we hear every day but that has implications. What are the conditions for credit? Are interest rates too high? Are the conditions too difficult, too much collateral? Things of that sort and we can work those things out and then put them in practice,” he continued.

The forum, the fourth in a series, was hosted by the International Monetary Fund (IMF), the Government of St. Kitts-Nevis and the Eastern Caribbean Central Bank.