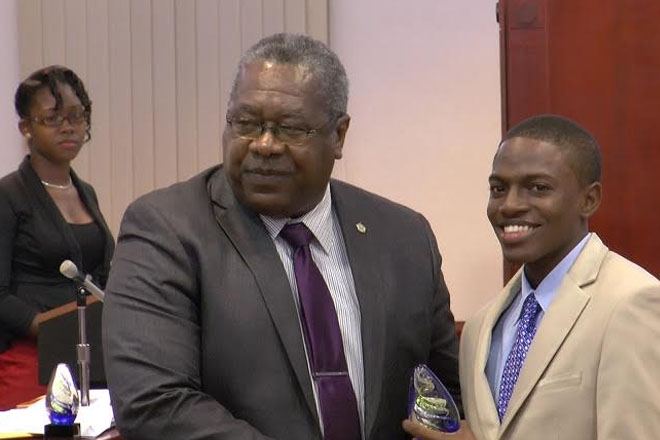 (ZIZ News) — Thursday was a momentous evening for 25 teenagers as the Department of Youth Empowerment recognised them for achievements in various categories.

Government ministers, family members, and other supporters filled the seats of National Assembly Chambers for the fifth staging of the 25 Most Remarkable Teens Awards Ceremony.

The ceremony honours teenagers’ accomplishments in non-traditional categories such as Courage to Overcome, Leadership, and Youth Activism.

The awards were initiated by the previous administration.

“When you look at the profiles of the persons being honoured, some of these persons are persons who have overcome adversity. That is something we must continue to highlight as a Federation. It sends a message to other young persons that in life you will experience challenges but despite the challenges that you have experienced you will succeed,” he said.

“I always say that I truly believe that the majority of our young people are good, decent young people who want to make the most of themselves and do well in life. And so, this 25 Most Remarkable Teens is one of those ceremonies that I really, really like because it gives us a chance to see our young people in a very positive light, unlike the message and the portrayal of your people in the media most times,” she said.

Director of Youth Empowerment, Geoffrey Hanley said the award has had a significant impact on youth in the past.

“You’d always hear them say that receiving this award would have changed their lives forever. There are some who would’ve been in trouble with the law and they would have turned their life around,” he said.

“There are some who would have had intentions of dropping out of school and with encouragement from the Ministry, they were able to get to the point where they were awarded. Some are now police officers. Some have now left the Federation to further their studies,” he added.

Parliamentarians from both the Government and the Opposition presented awards to each of the youth, commending them on their accomplishments and wishing them the best for the future.

The award for writing went to Kayla Sandiford.

In the category “Courage to Overcome”, Anson Bell Carty and Akeem Chumney were recognised.

Kayla, Shavonne, and Vakiel were recognised with an emphasis on music.

In the Visual Arts category, Tyana Brookes and Noel Nicholls were awarded.