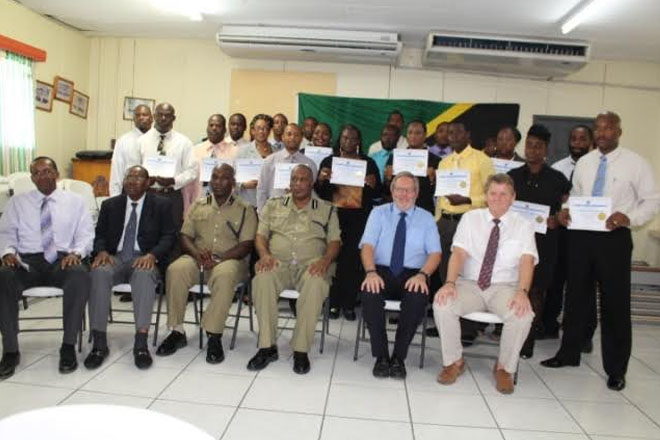 (ZIZ News) – The partnership between the Royal St. Christopher and Nevis Police Force and the Bramshill Policing Advisors continues to benefit the local security organisation and the community by extension as police officers build capacity.

ZIZ News was present at the Police Training Academy on Wednesday for the closing of an Investigative Interview Course.

The ceremony began at about 11:45am and heard remarks from a handful of persons including Force Chaplain, Leroy Benjamin who, in addition to praying for the officers, expressed hope that they would be able to keep the community safe.

Also addressing the gathering was Course Facilitator, John Bailey who gave an overview of the training, noting that participants engaged in a variety of sessions, some practical, on decision making, witness management, cognitive interviewing, effective listening, questioning skills, the art of conversation, and the P.E.A.C.E. Model of Interviewing.

He said, “The first five days, we started with managing crime scenes and we covered such theory as the golden hour, building blocks, the idealised decision making model, which is a tool which helps us make decisions and helps us identify lines of inquiry.”

He added, “The last five days, we moved into the suspect management arena and we looked at lying behaviour, lying indicators. We looked at how we baseline people’s behaviour to give indications of when they would be lying and how do we put that into our management of suspects.”

When Acting Commissioner of Police Stafford Liburd spoke, he made it clear that being able to effectively conduct investigative interviews is critical to the police force.

“We take it for granted that we merely ask some casual questions and move on but you need to have clarity of the circumstances and then you move forward. If we are fortunate and if we do a good job at the interview, we may reach the suspect or suspects,” he noted.

Commissioner Liburd said that while some officers do a fair job at interviewing suspects, the inability of others to do so has caused many cases to be withdrawn.

“I believe that some of our cases have fallen, they have been dismissed sometimes because we did not do a good job at interviewing and soliciting all information possible,” he said.

Near the end of the ceremony, Constable Detroit Henry received an award as the best student, with Customs Officer Nigel Claxton and Woman Sergeant Carlene Phipps receiving awards as the most improved participants.

While there, we also learnt that seven of the 26 participants were police officers based in Nevis.