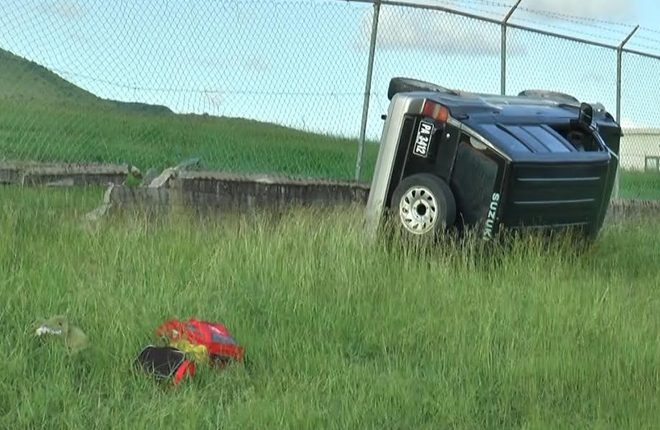 3-Vehicle accident on the bypass

(ZIZ News) — A man and a child escaped with their lives on Friday afternoon after their jeep flipped over in a three vehicle accident.

The Police Force, Fire and Rescue Services and the Emergency Rescue Services responded to an accident on the F.T. Williams Highway near the Yu Lounge at approximately 3:40pm.

According to information received from Head of the Traffic Department, Inspector Carl Caines, the 3 vehicles were travelling west.

The middle and rear vehicles collided causing the first vehicle in line, PA3412, to lose control and land on its side after knocking down a lamp post.

Neither the driver, Ricky Clarke of New Road Housing, nor the child passenger was hurt.

The rear vehicle ended up in the drain on the other side of the road and middle car received a small scratch on the front.

No injuries were reported.

ZIZ understands this accident was one of several that occurred on Friday.