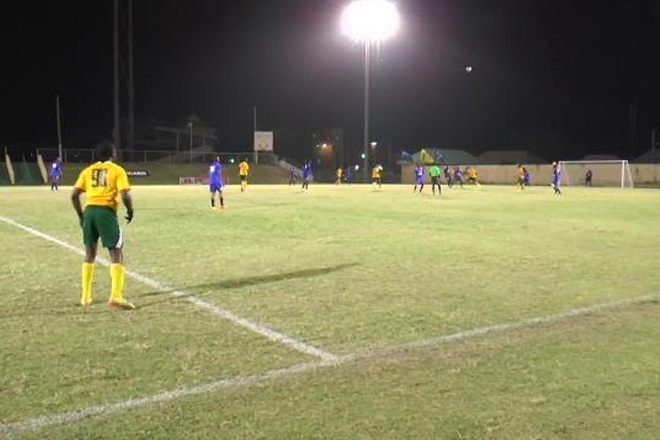 The highly competitive match saw six goals scoring in the first half; three goals apiece for each team.

For St. Peter’s, Dionis Stevens scored first, with that goal coming early in the third minute. Tijhaun Isaac added the team’s second goal in the 16th minute, before Stevens scored his second of the game in 20th minute.

Not to be outdone, Glenroy Samuels, Wazim Howe and Errol O’loughlin all scored in the first half for Conaree.

In the second half, Samuel put Conaree on top with his second goal in the 65th minute. However, Imron Ponteen helped St. Peter’s avoid defeat when he added the game-tying goal in the 87th minute of play.

After the match, Conaree’s Head Coach, Lester Morris told ZIZ that his players had to dig deep to earn a draw in the game.

“It was a hard fought game I must admit. The Conaree team, in the first half, we basically gave up some very, very easy goals but as I told my guys we just have to keep being resilient, keep the persistency and keep at what we are doing,” he said. “Basically we had to change the formation after we gave up three goals and right away we got back into the game by tying the game at 3 goals apiece at halftime.”

However, Morris did not hesitate to single out his goalkeeper for what he called a poor performance.

He added, “I know basically we don’t like to point fingers because there’s always introspect and we all need to do introspections but I believe our goalkeeper needed to be more solid in the goal and that is what caused us the difference between one point and three points tonight.”