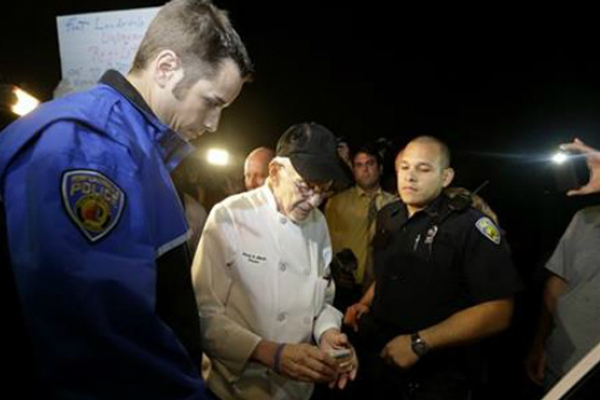 Fort Lauderdale, Florida (AP) — Despite being charged with violating a new ordinance by feeding the homeless in South Florida, 90-year-old advocate Arnold Abbott said he’s not deterred and even went back out for another feeding at a public park.

The face-off in Fort Lauderdale over the new ordinance restricting public feeding of the homeless has pitted those with compassionate aims against residents and businesses trying to protect their neighborhoods.

Abbott and two South Florida ministers were charged last weekend as they handed out food. They were accused of breaking the ordinance and each faces up to 60 days in jail and a $500 fine.

“One of the police officers said, ‘Drop that plate right now,’ as if I were carrying a weapon,” Abbott said.

Despite the brush with the law, Abbott, and the ministers, Dwayne Black and Mark Sims, went back out for a feeding at a public park Wednesday night as police filmed from a distance and a crowd of nearly 100 mostly homeless and volunteers cheered their arrival.

“God bless you, Arnold!” some shouted. And one man who broke out of the crowd, Eddie Hidalgo, 56, said the man he called ‘Chef Arnold’ was doing a great work.

“Thank God for Chef Arnold. I haven’t eaten all day. He feeds a lot of people from the heart,” said Hidalog, who added he’s being living on the streets after losing his job and house.

The conflict pits organizations with charitable intentions against residents and businesses who don’t want their neighborhoods to become magnets for the homeless.

Fort Lauderdale is the latest US city to pass restrictions on feeding homeless people in public places. Advocates for the homeless say the cities are fighting to control increasing homeless populations but that simply passing ordinances doesn’t work.

“Street feeding programs don’t work,” said Robert Marbut, a consultant and expert on homelessness in the US “Outlawing it doesn’t work, either. … You’re never going to have a good day arresting a priest.”