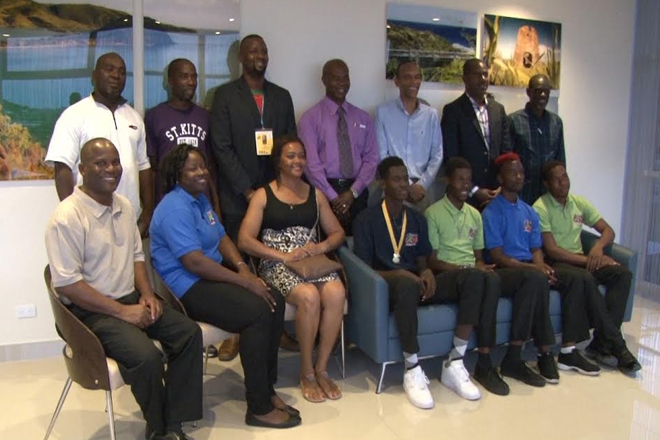 (ZIZ News) — It was a hero’s welcome for CARIFTA athletes at the RLB International Airport on Tuesday as government and sport officials hosted a ceremony to greet the teenage track stars.

Francis brought home a gold medal in the Under 20 Male High Jump Competition.

Among the dignitaries present to welcome the athletes was President of the St. Kitts Nevis Olympic Committee, Alphonso Bridgewater who called Francis an inspiration.

Minister of Sport, The Hon Shawn Richards brought commendations from the government and noted that while Francis brought home gold, all of the athletes should be proud of their performances.

“From all of the athletes who would have participated in the recently concluded Inter-High School Championships the four of you were able to successfully represent St. Kitts and Nevis at the CARIFTA Games. That of course is a major accomplishment and I don’t want you to take that lightly,” he said.

Francis spoke of his experience in Grenada including the point where he started to doubt himself.

“During the competition I was feeling a little down I wasn’t sure if I could fulfil my dream of winning. So I went to my coach and she gave me a little pep talk. I tried my best and on my last attempt I gave it my all and I realized I made it,” he said.