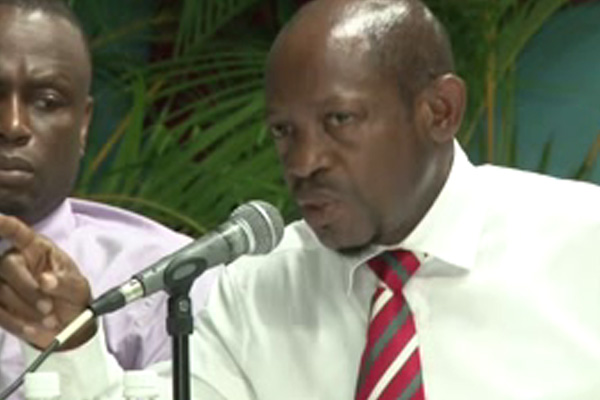 A Vote for Labour is a vote against Victimization

(ZIZ News) — Amid increasing accusations of political victimization across the Federation, St. Kitts and Nevis’ Prime Minister, The Rt. Hon. Dr. Denzil Douglas has offered a very simple solution to the issue: Don’t change the government.

Dr. Douglas was responding to a contributor to Wednesday’s Conversations for Progress meeting in Sandy Point who was concerned that supporters and allies of the St. Kitts/Nevis Labour Party would suffer victimization if the government changed.

Dr. Douglas said it was even more important to keep a Labour government in power as certain opposition members have stated their intention to ‘sweep the house clean’ with reference to Labour supporters. Not even the Governor General, according to Dr. Douglas, would be safe from the threat of victimization.

“Apart from what we’re seeing in Nevis, Dwyer Astaphan in one of his articles made it clear that they are going to “sweep the house clean” after they have won, and specific mention was made of even the Governor General. In other words they have signalled that even the Governor General, His Excellency, is not secure in his job because he will also be removed after the elections are called and they were to win. So the best way to avoid confusion is to make sure that there is a continuation of the party in government especially since the party in government is doing a whole heap ah good,” he said.