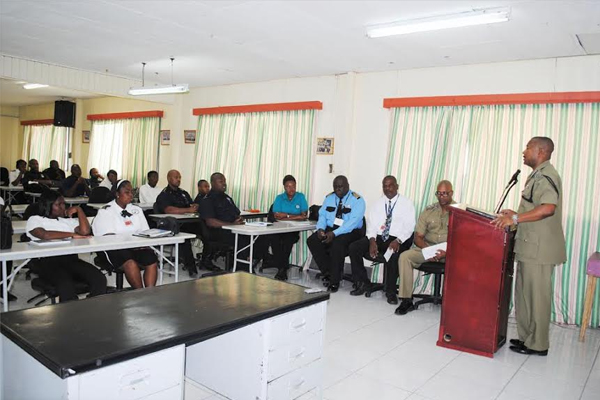 Basseterre, St. Kitts — Assistant Commissioner of Police with responsibility for crime in the Royal St. Christopher and Nevis Police Force , Mr Ian Queeley, has cautioned that while tourism is the major foreign exchange earner for the Federation, the trend will only continue if there is investor confidence.

“When a man or a group comes and invests $300million, they must be satisfied that security of the business, the security of their families is on par with what is required around the island,” said Mr Queeley.

The Assistant Commissioner of Police made the remarks at the Police Training School on Monday March 24 as he addressed the opening ceremony of a three-week Island Constable Course No. 1/2014 which is being attended by 77 persons drawn from various organisations on the island.

He told the participants that while St. Kitts and Nevis enjoys a thriving tourism industry it is not out of luck, but it is based on the fact that the country has been tested and tried.

“We cannot be earning foreign exchange if investor climate is not secure, and investor confidence plays a big part,” commented Mr Queeley. “So, your role as security officers within the various institutions on completion of this training, will put you in a better position to effectuate your duties bearing in mind this course covers a number of subject areas, paramount is discipline.”

He told them of a quote from a former senior magistrate who always reminded him that ‘A police has five seconds to make a decision; a lawyer goes to school for five years to defend that decision’.

“I want to congratulate you for being selected by your various agencies to be a part of this training,” said the Assistant Commissioner of Police. “I encourage you to make good use of the training and more than anything else be successful at the end of the training.

“You will be taught firearm classes; how to use guns. Untrained persons, and some trained persons always feel a false sense of security when they carry a firearm. I would want to warn you in advance, that is where your judgment will have to be counted on.”

“Their training will last for a period of three weeks and on completion of that training they should be qualified, once they are successful, to be Island Constables and there is whereby they will assist the police in performing some of the duties in the tourist related department.

“So they will be on the streets, on the beaches and so forth to assist, so that we can assure that tourists that come to our shores can feel safe at all material time.”

Supt. Moore explained that once they qualify to be Island Constables, they will have powers as police officers and on successful competition of the training they will be sworn in by the Governor General who will give them the instruments of authority so that they can perform their duties.

“St. Kitts and Nevis, like in any other Caribbean country, we must ensure that we raise the standard in every respect,” said Mr Moore. “We want to carry this to another level, knowing fully well that St. Kitts and Nevis is one of the top countries in the Caribbean in relation to attracting tourists.

“In our tourism product we are not looking at quantity, we are looking at quality, and as such, we must raise the standard so that persons can perform in an effective and efficient manner so that persons coming to our shores can feel welcome, they can feel safe and will come again and again and can spread good tidings because we do not want them to advertise the Federation for the wrong reason.”

Master of ceremony was Inspector Eldrin Dickenson, Deputy Commandant, Police Training School, who told the participants that what is going to be taught for the period of the course is going to last them for a lifetime.

Police Force Chaplain Pastor Leroy Benjamin who was not wearing his official uniform talked on the virtues of discipline, and explained to them that he had to ask permission from ACP Ian Queeley because he had not been able to get the uniform from the laundry in time for the ceremony.