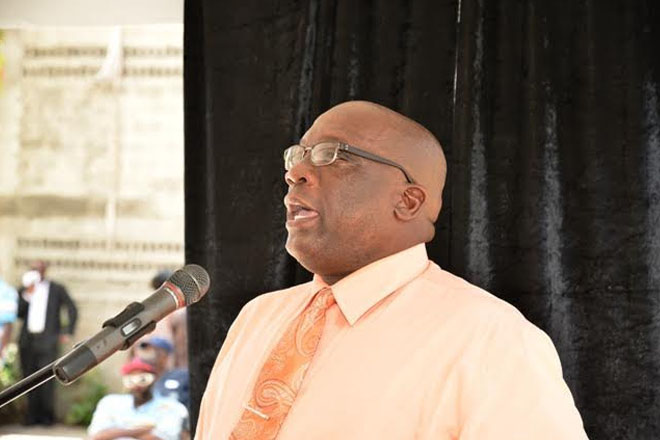 Address by Prime Minister Dr. The Hon. Timothy Harris at the Ceremony for the Distribution of Cheques to Former Sugar Workers 18th September 2015

Basseterre, St. Kitts — Today marks an important milestone in the history of our country and in the life of this Team Unity administration, on the eve of the 32nd anniversary of our independence and exactly four months after we came here to open the Sugar Workers Restoration Fund (SWRF) Secretariat. We are now here to deliver on a BIG promise to many of the unsung heroes of this country…the women and men like Allison Williams, Agatha Akers, Helena “Bernie” Jarvis, Joseph Hercules, Aubrey Pemberton and Chemical Wilson, who toiled in the sugar industry for decades to make this country a success story.

For those who may argue that this was a mere election gimmick at the time, I ask, what is it now that over two thousand three hundred former sugar workers are finally getting their justice? I say to you that it is right and proper that these persons, who toiled in some of the harshest working conditions to secure a future for themselves, their children and grandchildren, are now getting their just recognition and reward for supporting their families, for putting a roof over their heads, for clothing and feeding their children and sending them to school and to ensure that they were healthy and safe.

It is right and proper that we bring restorative justice to these unsung heroes who broke their backs and braved sweltering heat in the midday sun to ensure that our country earned well needed foreign exchange to provide jobs in other industries and other sectors such as national security, healthcare, education and other social services. Indeed, as the Premier before me maintained, without sugar life in St. Kitts and Nevis would have been difficult and hard. For years the sugar industry was the only backbone, the only real industry keeping hope alive.

The policy of Team Unity seeks to give our people a fair share of our prosperity because the people built this country from the ground up. From cane field to cane field, railway to factory, washer to crusher, boiler house to sugar house. We then are steadfast in our caring concern to give our people of St. Kitts and Nevis a fresh start after they have been aggrieved for more than ten years, having been deprived of the opportunity to reasonably, tangibly and meaningfully share in our economic growth. Allan Rubain of Saddlers is here…he needs this fresh start and so to do all the beneficiaries gathered here. Without a Team Unity government this day would have never come to you the former sugar workers.

This is what we meant when we said a fresh start in industrial relations. This is what we meant when we said a fresh start in ending the exploitation of the worker. A fresh start for fairness…a fresh start for justice for the laboring masses. Today may be as propitious an occasion as any to remind the entire country that our Team Unity government will lead by example. Our word is our bond and what we say we will do, we will certainly do in a timely, responsible and deliberate way. Let us not forget that this your government has a 5-year contract. We are delivering quickly on our manifesto commitments to you and we will not slow down and we will not relent. We are aware, just as you are that the 5-year mandate is more a marathon run than a sprint. So everything we promise will not be delivered this year or next year but we can assure you that we will deliver on our promises within the 5-year contract period.

In that regard, I want to thank the former sugar workers who kept faith with the government over the last four months during which time we set up a credible system to deliver on our promise. The election losers said that this could not happen. They said that it was wrong to bring justice to you the aggrieved workers. They said it was too much money. They who lost the election even said that it was unnecessary to pay because they had already paid.

But today to those who promulgate the notion that it is wrong to correct an injustice, I say you are wrong! For it is not only that the former sugar workers are getting a fair share of the pie, it is that the policy position taken by this Team Unity administration to share the pie is the right one. The election losers must know it and that is why they are cringing while we are paying. That is why they serve up one distraction after another to hide the injustice perpetrated on the former sugar workers for so long. Franklin Maitland, who chaired the SWRF Accounts sub-committee, outlined that this matter was one of economic and moral justice. Team Unity then is delivering justice to the people of St. Kitts and Nevis.

So, the election losers do not want to accept the fact that on the 16th day of February 2015, the people were right. Team Unity has come to the rescue and what we are doing and will continue to do, with your blessing and by the grace of God, will be right by and for you the people. And what we are doing today, this morning, at this special place across from our hallowed Independence Square, on the eve of our 32nd anniversary as a sovereign nation, is empowering you the ordinary people of St. Kitts and Nevis. We do that so that you and your children and grandchildren can stand on your own and build a prosperous future and an enduring legacy. That is the right thing to do now and it will always be the right thing to do for the future.

The people of this country know it, which is why Team Unity is here today doing it! The government and people of the Bolivarian Republic of Venezuela know it, and that is why they generously gave us EC$16 million to make it possible. The Chairman and members of the SWRF committee and subcommittees know it and that is the reason why all these people, drawn from the public and private sectors and the NGO community, came out to work to ensure that this day can happen…and they did all this work without asking for one cent. The staff members of the SWRF Secretariat know it and so they worked long hours, sometimes six days a week I am advised, to make this day a reality.

And what is the inescapable truth that we all know? It is that over two thousand three hundred former sugar workers will be beneficiaries of an EC$16 million payout starting today, made possible by your Team Unity government with the help and support of the government of Venezuela. This is a promise made, a promise delivered. This (payout) of course compares favourably to the nine hundred and sixty-eight local beneficiaries in the 2005-2006 payout. We have therefore more than doubled the number of former sugar workers to whom this country, on the eve of our 32nd anniversary of independence, must say thank you in a tangible, material and meaningful way for their contribution to the nation. No matter how much the election losers may slice and dice it, the fact is that another $EC16 million being injected into the economy of St. Kitts and Nevis will benefit every man, every woman, every boy and girl in this country. That was our promise of a fair share (for all) that we made before taking office and I am happy to say that we are keeping our promises.

And we are not done yet. As a matter of fact, this is just the beginning of the journey on the road that we have mapped out to move our country upward and forward purposefully, as you the people deserve. Resolutely, fairly and justly so that we all share the prosperity which this country achieves. That is why you put us in office…that is why you gave us the mandate for a fresh start.

However, we know and all of us know, and Eugene Hamilton made the point earlier, that the Team Unity administration cannot do it alone. Yes, it will take the collective effort and determination and the will of our residents and citizens, be they at home or abroad and all of our friends and well-wishers. We are happy to declare that the people and government of Venezuela are our special friends and we thank them as we thank every other country which has been partnering with us on the cause of development, on the cause of justice for all. Let’s give all allies of St. Kitts and Nevis a round of applause. In that group we recognise the government and people of Cuba, we recognise the government and people of Taiwan and we recognise our colleagues far and near in the region. Our distinguished Ambassador to CARICOM, Mr. Osborne, will be presenting his credentials shortly and as it were attempt to refresh and restart our relationship with the rest of the region.

Finally, I want to thank all of the people for this day. Premier Amory made the (big) point that the former sugar workers built the foundations of our country and today we can be proud. The government and people of Venezuela should be thanked for their continuing generosity to the people of this nation. I must also thank the persons from the public and private sectors, including the St. Kitts-Nevis Trades and Labour Union, who worked diligently to bring this promise of fair share to all the former sugar workers. In that regard I want to acknowledge Sydney Bridgewater from the leadership of the St. Kitts-Nevis Trades and Labour Union. Mr. Bridgewater is at the right place at the right time, let us give him a hand of welcome.

This Team Unity administration is demonstrably committed to doing the people’s business carefully and responsibly. We are determined to do that by establishing institutional mechanisms to ensure accountability and transparency. We are committed to inclusiveness and utilising the resources that we possess as an independent nation to address issues that are important to our people. That is why we assembled a multidisciplinary team of competent professionals who worked voluntarily on this project to ensure it came to fruition in a fair and timely manner.

Thus I say thank you to the Chairman and other members of the Sugar Workers Restoration Fund Committee; the members of the sub-committees responsible for Accounting, Review, Research, Documentation, Criteria, Eligibility and Public Relations; the staff of the Sugar Workers Restoration Fund Secretariat; and all those persons and entities, too numerous to mention, for their service to country. The SWRF committee was comprised of a professional group of persons who had no stake other than to see justice done.

Allow me at this time to recognize the committee members:

This was a labour of love on behalf of the laboring class and I want to thank the committee for its professional work and for yeoman national service.

We in Team Unity understand that a government of the people must work, at all times, for the benefit of you the people. That is our pledge! This is our promise!

Thank you! To God be the Glory!