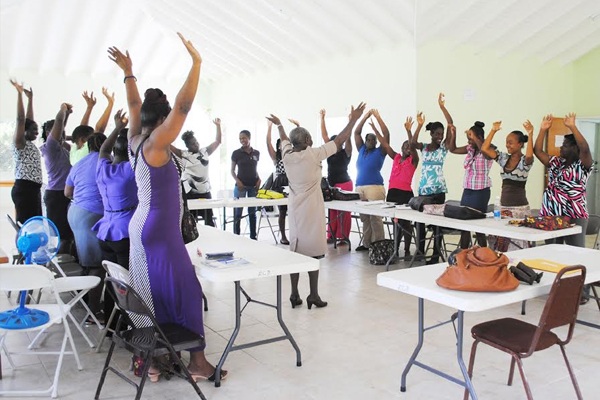 Basseterre, St. Kitts — What would in the past have been viewed as a nightmare by any loving parent will soon become a thing of the past thanks to the People Employment Programme (PEP).

It is the dream of every parent to bring up a healthy child, but when such a child falls sick and has to be put on medication it worries a parent if the medication will be administered the right way when the child goes to a day care centre, nursery school or a pre-school.

A number of parents have been known to keep a sick child at home until all the prescribed medicine is finished. If not, some physically go to the day care centre to ensure that the child would have been given the right dosage at the right time, or to administer it themselves.

The Ministry of Education has in the past ensured that all supervisors and workers at day care centres are trained to deal with such cases. However, the People Employment Programme (PEP) which is currently training a cadre of Early Childhood workers has gone a step further.

“Presently the PEP Early Childhood trainees are going through a module that deals with the safety and wellbeing of children,” explained PEP’s Facilitator for Early Childhood Development (ECD), Mrs Vanta Walters.

“One of the topics that they had to do was the Administering of Medicine to Infants/Toddlers and Pre-schoolers, and so I felt that a person who is trained in that field like a registered nurse would be a good person to deal with that topic.”

She therefore invited Nurse Christine Wattley, the Community Nurse Manager for Community Based Services at the Pogson Medical Centre in Sandy Point to come to the Challengers Community Centre where the 21 trainees are undertaking a TVET-guided course that will lead to their earning the Caribbean Vocational Qualification (CVQ).

According to Mrs Walters, Nurse Wattley is well known to her because in the years she (Walters) was the head of the Early Childhood Unit in St. Kitts and Nevis she used to invite Nurse Wattley to give lectures to those already employed as caregivers in day care centres, some who would have been in employment for a number of years.

“But in this case these ladies have never been in any preschool or nursery or any childhood centre,” observed Mrs Walters. “They are being trained before they set foot into any of the centres, so that is what is different between her coming and assist in the training of these ladies as against those who were teaching before, working in early childhood centres.”

Nurse Wattley stated that she had been asked to speak to the prospective childcare workers on the administration of drugs, how to administer drug to infants and toddlers, mainly the pre-schoolers.

“It is the first time that this line of workers, young women from the People Employment Programme that we have had to interface with them at this time. I gave them the basic steps that they should take as caregivers in the nursery. I believe that they are aware of what they should be doing and they would be able to do it properly.”

Mrs Vanta Walters noted that Nurse Wattley did a very good job and the fact that she used simple language and was able to break the information down to the level where the PEP trainees could understand.

A trainee, Ms Melica Hodge, 30, who is the mother of two said that the training is getting better and as a mother she is even learning things she did not know and thanked PEP for giving her the opportunity to learn while at the same time being paid a salary.

Ms Hodge, who hails from Sandy Point said that after she was laid off by one of the major hospitality operators as a cook, she was able to realise her lifelong dream of starting her own day care.

“PEP is giving me that opportunity and the idea to start with,” said Ms Hodge. “When and if I open my day care centre I will open it in my home town of Sandy Point. I have learnt quite a lot but I still need to learn more about children. I know about their safety and about the illnesses them and the symptoms and stuff like that, and Nurse Wattley did a good job.”

Ms Cynthia Benjamin, a mother of one is expecting her second child in September. Since she joined PEP under the tutelage of Mrs Walters she says that she has learnt a lot about bringing up children which were different from what she learnt from her mother.

“I plan to get employed for the while and then maybe in the future I open my own day care,” said Ms Benjamin. “Things are hard now, and the government through PEP is offering me a training for my future sustainability while is it paying me now to handle the challenges of life as I do my training.”