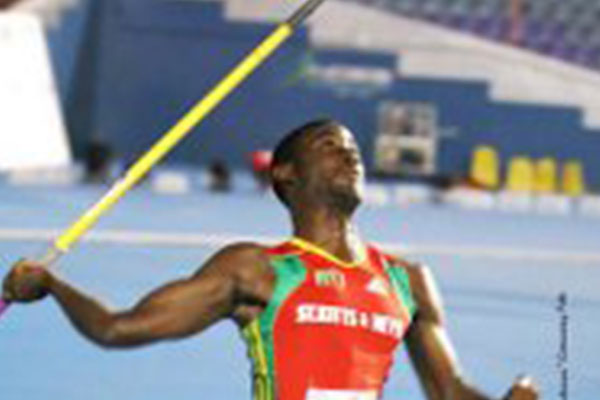 Adrian Williams, the under 20 bronze medalist in the 2014 Carifta games held in Martinique, was interviewed by Lester Blackett, President of the Nevis Amateur Athletic Association on Monday  28th April.

Following are the issues dealt with during that interview:

Question: This was your last Carifta Games, how was the experience?
Answer: Well you know … it was good … my last meet was with the biggest Carifta team St. Kitts & Nevis has ever sent which was good … let the younger ones that are coming up get the exposure … but my thoughts on it is that it was good.

Question: How was your last Carifta javelin competition?
Answer: That was good … also might have been great if I got the Gold on my last year, but you know things don’t always go your way … the Lord knows what he’s doing … he saving the “around my neck” for bigger and better moments so you know am pleased with my performance … plus I’m under a new coach in a new environment, so it’s a bit technical right now, working on my technique and there are improvements … let’s just see how far it will take me … I hope it’s until the end.

Question: What did you think about the distance you threw – a new personal best (and a new National Record)?
Answer: I was happy at first when I read 64.49m on the board, but then I thought to myself, “I’ve been throwing 63.22 without a refined technique and without hard gym work … so I said to myself, Adrian this is not your best … you can do better … and the weather was terrible … could not get a good warmup with all the rain … But I said I’m pleased for now … just looking to do better next time, which I will.

Question: How did it feel competing against your new training partner, ShakeilKadeemWaithe?
Answer:Lol … well it wasn’t the first time I’ve competed with him and it certainly won’t be the last … but I enjoy watching him throw … he’s really good … so I take that as motivation to carry me forward … and he has beaten me twice and I think it’s getting out of hand, lol.

Question: Did both of you celebrate together after winning the Gold & Bronze?
Answer: Not exactly … we just stayed there and smiled at each other.

Question: How has the experience in Trinidad and then in Cuba helped you?
Answer: Yeah it’s good … picked up a few injuries in Cuba but nothing my body cannot heal … other than that, it’s good … there are improvements and that’s what I’m looking for … so my word is that it’s good.

Question: The 70m distance would rank you among the best juniors in the world – can you achieve that and when?
Answer: Well yes, I can achieve it … I have a meet this weekend and the next weekend, so that’s when I want to try and make my mark.

Question: What are your plans for the future in the javelin?
Answer: I know I can make it as one of the best javelin throwers in the world, once I put my mind to it and push myself … so that’s what I’m going to do.

Question: How do u get on with the coach?
Answer: Good … expecting the chemistry to grow with time.

Question: Your javelin career aside, what about your educational goals?
Answer: That’s something I’m really interested in … I want to go away to study massage therapy.

Question: What message do you want to send to the young and upcoming athletes in St. Kitts & Nevis?
Answer: Well I just wanna say sometimes we often feel like giving up … you saying to yourself it makes no sense … but that moment, when you give up, is when you’re a step away from making your dreams happen … it’s never too late, well unless you hit over 50 … lol … but I want you guy’s to stick a pin on this … have it tattooed on your brain … NEVER GIVE UP! Be the person in your dreams in reality … FOR THE GOOD WILL ALWAYS TURN INTO GREAT … AND A NEXT THING, TAKE YOUR EDUCATION SERIOUS … WITHOUT EDUCATION LIFE IS NOTHING.

Question: A number of persons helped you get where you are today … do you wish to acknowledge them?
Answer: Yeah, thank you for reminding me … I wanna say thanks to all those who made this happen … the SKNAAA, SKNOC, NEVIS A.A.A, NEVIS ISLAND ADMINISTRATION, Social Development, my supporters and coaches (including the Gladiators Track Club) and last but not least my Mother, Glennette Williams … thanks to all … am really grateful for what you guys have done and I’m doing great … and see you guys in the next 8 weeks.

Question: Anything else you wish to say as we close the interview?
Answer:Lol … no, I’ll let my performances do the rest of the talking for now.

This interview can be accessed on the Nevis Athletics Association Facebook Page at https://www.facebook.com/nevisathletics and the website at https://sites.google.com/site/nevisaaa/carifta-2014-adrian-interview.

2012 – Won the Gold medal in the Javelin (700g) event in a distance of 68.41m at the 19th CACA& B Championships in El Salvador establishing a new Central and Caribbean Junior Record in that event.

… Won the Gold Medal in the U -17 Boys Javelin (700g) event in a distance of 60.15m at 40th Carifta Games held in Montego Bay, Jamaica. Setting a new Carifta Games Record in that event.

Adrian continues his training in Trinidad with Keshorn Walcott, Olympic Gold medallist with the support of the Nevis Island Administration, the Nevis Amateur Athletic Association (NAAA), the SKNOC& the SKNAAA.

The Nevis Amateur Athletic Association applauds and congratulates this son of the soil and wishes him every success as he benefits from his new training environment in Trinidad, under coach Ismael Lopez (coach of the Olympic Gold medalist, Keshorn Walcott).