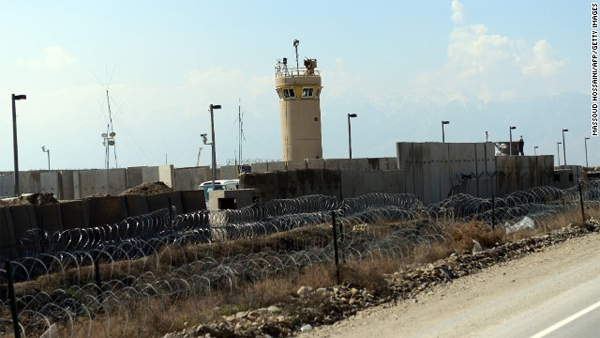 (CNN) — Citing a lack of evidence, Afghan authorities released from prison 65 men Thursday over objections from U.S. officials, who said they pose a threat to security forces and civilians.
“We took this decision according to our law,” said Mohammad Ishaq Aloko, the Afghan attorney general.

Abdul Shukor Dadras, head of the Afghan Review Board, said the attorney general ordered the releases from the Parwan Detention Center — formerly known as Bagram prison — after a careful review of 88 cases.
The U.S. military in Afghanistan said some of the men are linked to attacks that killed or wounded 32 American or coalition service members and 23 Afghan security personnel or civilians.

In a statement posted on its website, the U.S. Embassy in Kabul called the move “deeply regrettable,” saying the Afghan government “bears responsibility for the results of its decision.”
The release comes amid broader tensions between Washington and Kabul over whether Afghan President Hamid Karzai will sign a security agreement that U.S. officials have sought to keep some U.S. and other coalition troops in Afghanistan after this year.

Prior to the prisoners’ release, U.S. authorities had repeatedly aired their displeasure over the plans.
“We have made clear our judgment that these individuals should be prosecuted under Afghan law. We requested that the cases be carefully reviewed,” the U.S. military said ahead of the release. “But the evidence against them was never seriously considered, including by the attorney general, given the short time since the decision was made to transfer these cases to the Afghan legal system.”
Releasing them, the embassy said, “is contrary to Afghanistan’s commitment in our 2012 Memorandum of Understanding to take all necessary steps to ensure that detainees do not pose a continuing threat to Afghanistan, the international community or the United States.”

NATO Secretary General Anders Fogh Rasmussen said he was “gravely concerned” by the decision, “which appears to have been made based on political calculations and without regard for due process before the Afghan courts.” In a statement, he called it “a major step backwards for the rule of law in Afghanistan.”

A 23-page document obtained by CNN Pentagon Correspondent Barbara Starr from a U.S. military official who asked not to be identified outlines what it says are the cases against each of the released men. According to the document, 25 of the men were linked to the production or placement of IEDs; 33 tested positive for explosive residue when processed after capture; 26 were associated with attacks that killed or wounded 57 Afghan citizens and Afghan National Security Forces; about 19 were associated with attacks that killed or wounded 60 U.S. or coalition force members.

The U.S. military’s statement detailed evidence against several of the suspects, noting that the group included an alleged Taliban explosives expert, a suspected Haqqani network commander and a specialist accused of building and placing improvised explosive devices.

“These individuals are dangerous,” U.S. State Department spokeswoman Marie Harf said Wednesday. “They pose threats to the safety and security of the Afghan people and the Afghan state.”