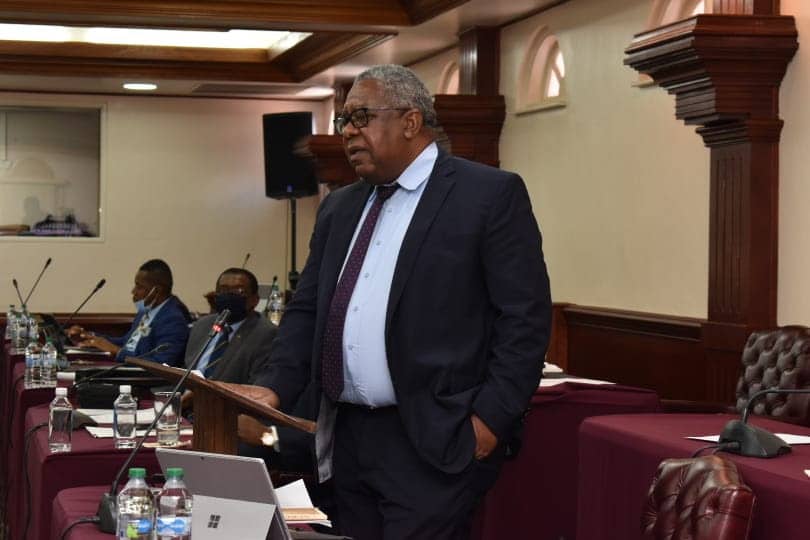 BASSETERRE, St. Kitts, June 30, 2021 (Press Unit in the Office of the Prime Minister) – Attorney General and Chair of the Disaster Mitigation Council, the Honourable Vincent Byron, has publicly defended the integrity of the National COVID-19 Task Force and all officials working to protect the nation from the deadly disease against the baseless claims of incompetence peddled by members of the Opposition.

The Attorney General lauded the efforts of local health officials who began putting the necessary measures in place in St. Kitts and Nevis months before the World Health Organization (WHO) declared the COVID-19 situation a pandemic in March of 2020.

As a result, the twin island Federation staved off the worst effects of the pandemic for more than a year where the country recorded just 45 cases of the virus.

At Monday’s (June 28) Emergency Sitting of the National Assembly where a Resolution was passed to extend the State of Emergency for a period of six months, Opposition MPs sought to question the national response to the pandemic. This was quickly refuted by the learned Attorney General.

“I take umbrage Mr. Speaker of the work of the National Task Force in this country because they have done an excellent job in the management of the COVID response and everybody in this country knows,” Minister Byron said.

Attorney General Byron said his Government and the Task Force were always mindful that despite their best efforts, there was always the chance that the virus would make its way into the communities of St. Kitts and Nevis, as has been the case over the last five weeks where more than 300 hundred positive cases have been reported.

Notwithstanding the limited capabilities of a small island state, Minister Byron said local health and security officials have again responded exceptionally well in the testing and contact tracing exercises.

“The contact tracing is better than anywhere else in the region…that is why we believe that we can contain this because the contacts will be ring-fenced, they will be tested, they will be quarantined, if it is that they have tested positive they will be isolated [and in doing so] we will reduce the number of people who are positive. When that happens, we can then reopen the country because we have always had, from the very beginning, a very clear and focused plan on how we would deal with this matter,” the minister said.